ITM Power (LON:ITM – Get Rating)‘s stock had its “equal weight” rating reissued by equities research analysts at Morgan Stanley in a research report issued on Tuesday, MarketBeat reports. They currently have a GBX 470 ($5.87) price target on the stock. Morgan Stanley’s price objective indicates a potential upside of 43.69% from the company’s previous close.

About ITM Power (Get Rating)

ITM Power Plc designs, manufactures, and sells hydrogen energy systems for energy storage, transportation, and industrial sectors in the United Kingdom, Germany, rest of Europe, and the United States. It offers HGas for power-to-gas, clean fuel, and industrial hydrogen applications. The company is also involved in the development and manufacture of prototype products; and sale of electrolysis equipment and hydrogen storage solutions. 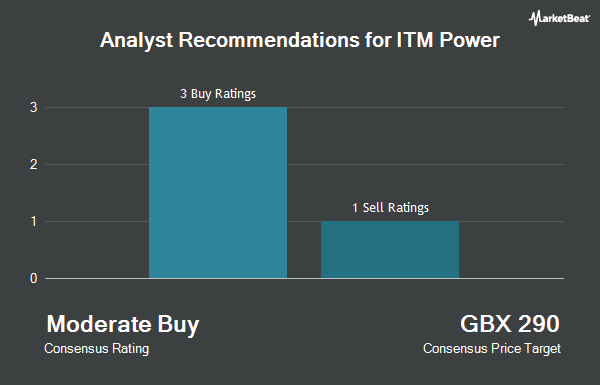 Complete the form below to receive the latest headlines and analysts' recommendations for ITM Power with our free daily email newsletter: