LivaNova (NASDAQ:LIVN – Get Rating) released its quarterly earnings results on Wednesday. The company reported $0.48 earnings per share for the quarter, hitting the Zacks’ consensus estimate of $0.48, MarketWatch Earnings reports. The company had revenue of $240.20 million during the quarter, compared to analysts’ expectations of $231.57 million. LivaNova had a positive return on equity of 9.31% and a negative net margin of 12.78%. The business’s revenue for the quarter was down 3.0% compared to the same quarter last year. During the same period in the previous year, the firm posted $0.35 earnings per share. LivaNova updated its FY22 guidance to $2.50-$2.80 EPS.

Several research analysts recently weighed in on the stock. UBS Group raised shares of LivaNova from a “neutral” rating to a “buy” rating and set a $96.00 target price for the company in a research note on Thursday, February 24th. Needham & Company LLC reduced their price objective on shares of LivaNova from $120.00 to $106.00 and set a “buy” rating on the stock in a research note on Thursday, February 24th. Wolfe Research assumed coverage on shares of LivaNova in a research report on Tuesday, April 5th. They set an “outperform” rating and a $95.00 target price on the stock. Zacks Investment Research downgraded LivaNova from a “hold” rating to a “sell” rating in a report on Saturday, February 26th. Finally, StockNews.com initiated coverage on LivaNova in a report on Thursday, March 31st. They set a “hold” rating on the stock. One analyst has rated the stock with a sell rating, one has issued a hold rating and six have given a buy rating to the company. According to MarketBeat, the company presently has an average rating of “Buy” and an average target price of $101.57.

About LivaNova (Get Rating) 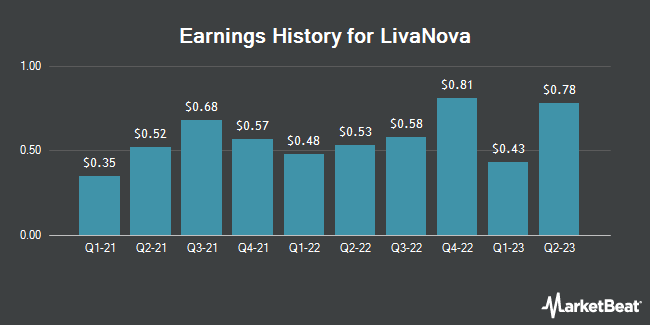 $0.69 Earnings Per Share Expected for Intel Co. This Quarter