Newmont Co. (NYSE:NEM – Get Rating) COO Robert D. Atkinson sold 3,000 shares of the business’s stock in a transaction that occurred on Monday, May 2nd. The stock was sold at an average price of $71.20, for a total value of $213,600.00. Following the completion of the sale, the chief operating officer now owns 70,617 shares of the company’s stock, valued at approximately $5,027,930.40. The transaction was disclosed in a legal filing with the SEC, which is available through this hyperlink.

Newmont (NYSE:NEM – Get Rating) last issued its quarterly earnings results on Friday, April 22nd. The basic materials company reported $0.69 earnings per share for the quarter, missing the Thomson Reuters’ consensus estimate of $0.71 by ($0.02). The firm had revenue of $3.02 billion during the quarter, compared to analysts’ expectations of $3.06 billion. Newmont had a return on equity of 10.24% and a net margin of 8.53%. Newmont’s revenue for the quarter was up 5.3% on a year-over-year basis. During the same period in the previous year, the company earned $0.74 earnings per share. Equities research analysts expect that Newmont Co. will post 3.4 earnings per share for the current fiscal year. 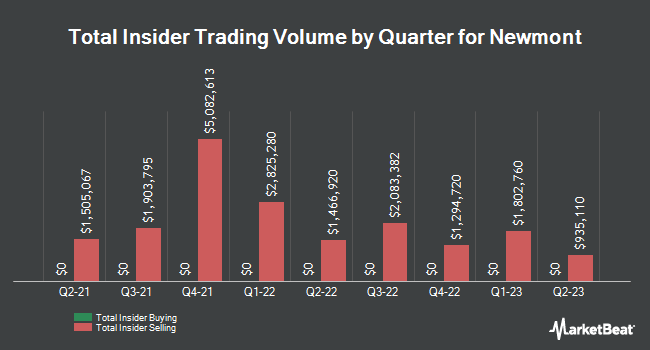