Payoneer Global (NASDAQ:PAYO – Get Rating) was upgraded by Zacks Investment Research from a “strong sell” rating to a “hold” rating in a research report issued on Thursday, Zacks.com reports.

According to Zacks, “Payoneer Inc. is a commerce technology company powering payments and growth for economy. Payoneer Inc., formerly known as FTAC Olympus Acquisition Corp., is based in NEW YORK. “

Payoneer Global (NASDAQ:PAYO – Get Rating) last announced its earnings results on Thursday, March 3rd. The company reported ($0.06) EPS for the quarter, missing the consensus estimate of ($0.02) by ($0.04). Payoneer Global had a negative return on equity of 17.36% and a negative net margin of 7.18%. The firm had revenue of $139.22 million during the quarter, compared to analyst estimates of $126.29 million. During the same quarter in the previous year, the business earned ($0.29) earnings per share. The business’s quarterly revenue was up 47.0% compared to the same quarter last year. On average, research analysts forecast that Payoneer Global will post -0.22 earnings per share for the current year.

About Payoneer Global (Get Rating) 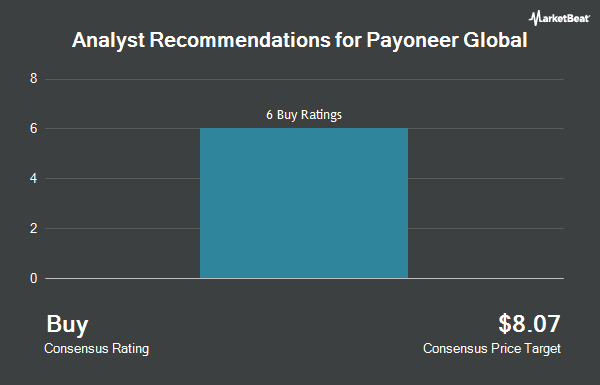 Complete the form below to receive the latest headlines and analysts' recommendations for Payoneer Global with our free daily email newsletter: