Nevro (NYSE:NVRO – Get Rating) had its target price cut by research analysts at Piper Sandler from $65.00 to $64.00 in a research report issued on Thursday, The Fly reports. Piper Sandler’s price objective points to a potential upside of 1.80% from the company’s previous close.

Nevro (NYSE:NVRO – Get Rating) last posted its quarterly earnings results on Wednesday, May 4th. The medical equipment provider reported ($0.98) earnings per share for the quarter, topping the Zacks’ consensus estimate of ($1.11) by $0.13. Nevro had a negative return on equity of 33.06% and a negative net margin of 33.95%. The company had revenue of $87.40 million during the quarter, compared to the consensus estimate of $86.19 million. During the same period last year, the business earned ($0.85) EPS. The business’s quarterly revenue was down 1.4% on a year-over-year basis. Research analysts anticipate that Nevro will post -2.92 EPS for the current year. 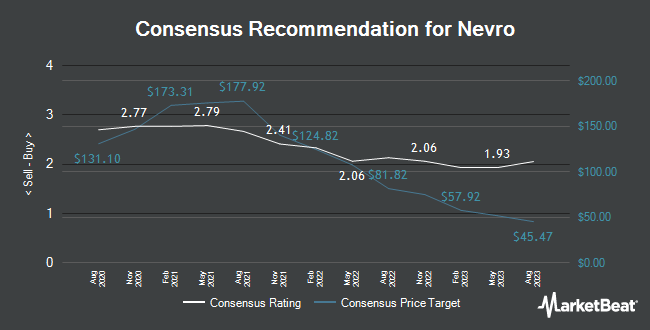 Whitehaven Coal Limited Short Interest Up 130.6% in May