Vertex Pharmaceuticals Incorporated (NASDAQ:VRTX – Get Rating) Director Sangeeta N. Bhatia sold 737 shares of the company’s stock in a transaction on Monday, May 2nd. The stock was sold at an average price of $258.94, for a total value of $190,838.78. Following the transaction, the director now owns 5,903 shares of the company’s stock, valued at $1,528,522.82. The sale was disclosed in a filing with the SEC, which is available through this hyperlink.

Vertex Pharmaceuticals Incorporated, a biotechnology company, engages in developing and commercializing therapies for treating cystic fibrosis. The company markets SYMDEKO/SYMKEVI, ORKAMBI, and KALYDECO to treat patients with cystic fibrosis who have specific mutations in their cystic fibrosis transmembrane conductance regulator gene; and TRIKAFTA for the treatment of patients with CF 6 years of age or older who have at least one F508del mutation. 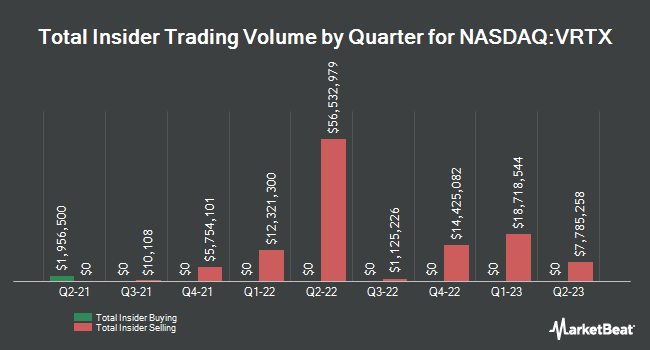 -$0.24 Earnings Per Share Expected for Processa Pharmaceuticals, Inc. This Quarter

Complete the form below to receive the latest headlines and analysts' recommendations for Vertex Pharmaceuticals with our free daily email newsletter: