Viridian Therapeutics (NASDAQ:VRDN – Get Rating) will release its earnings data after the market closes on Thursday, May 12th. Analysts expect Viridian Therapeutics to post earnings of ($0.92) per share for the quarter. Persons that are interested in participating in the company’s earnings conference call can do so using this link.

Viridian Therapeutics (NASDAQ:VRDN – Get Rating) last issued its quarterly earnings results on Thursday, March 10th. The company reported ($1.32) earnings per share (EPS) for the quarter, missing analysts’ consensus estimates of ($0.85) by ($0.47). The business had revenue of $0.21 million during the quarter, compared to the consensus estimate of $0.75 million. During the same quarter in the prior year, the company earned ($5.31) EPS. On average, analysts expect Viridian Therapeutics to post $-4 EPS for the current fiscal year and $-3 EPS for the next fiscal year.

A number of brokerages have issued reports on VRDN. JMP Securities lowered their price target on Viridian Therapeutics from $36.00 to $31.00 and set a “market outperform” rating on the stock in a research report on Friday, March 11th. Zacks Investment Research downgraded Viridian Therapeutics from a “hold” rating to a “sell” rating in a research report on Wednesday, March 16th. One equities research analyst has rated the stock with a sell rating and five have assigned a buy rating to the company. Based on data from MarketBeat, Viridian Therapeutics presently has a consensus rating of “Buy” and an average price target of $32.40.

In related news, CEO Jonathan Violin sold 30,000 shares of Viridian Therapeutics stock in a transaction that occurred on Monday, May 2nd. The stock was sold at an average price of $13.04, for a total transaction of $391,200.00. Following the transaction, the chief executive officer now owns 510,905 shares in the company, valued at $6,662,201.20. The sale was disclosed in a document filed with the SEC, which is accessible through this link. In the last quarter, insiders have sold 60,000 shares of company stock worth $958,836. 8.70% of the stock is currently owned by company insiders.

Viridian Therapeutics, Inc, a biotechnology company, develops treatments for patients suffering from serious diseases. It develops VRDN-001, a humanized monoclonal anti-IGF-1R antibody that is in Phase 1/2 clinical trial for the treatment of thyroid eye disease (TED); VRDN-002, an IGF-1R antibody, which is in Phase 1 clinical trial; and VRDN-003, a therapeutic antibody targeting IGF-1R for the treatment of TED. 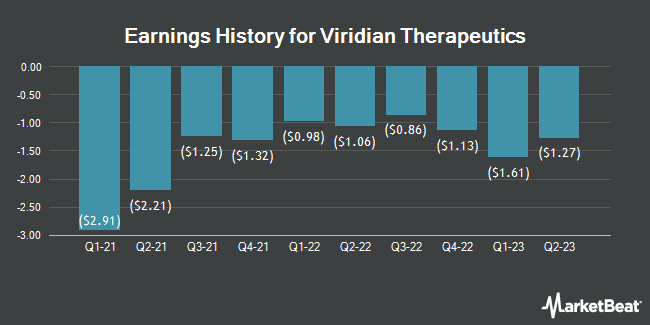 Complete the form below to receive the latest headlines and analysts' recommendations for Viridian Therapeutics with our free daily email newsletter: