StockNews.com upgraded shares of W. P. Carey (NYSE:WPC – Get Rating) from a hold rating to a buy rating in a research note released on Wednesday.

W. P. Carey (NYSE:WPC – Get Rating) last announced its quarterly earnings data on Friday, April 29th. The real estate investment trust reported $0.82 EPS for the quarter, beating the consensus estimate of $0.43 by $0.39. W. P. Carey had a net margin of 37.65% and a return on equity of 6.94%. The business had revenue of $344.10 million during the quarter, compared to the consensus estimate of $340.96 million. During the same period in the previous year, the business earned $1.22 earnings per share. The company’s revenue was up 12.4% on a year-over-year basis. Analysts forecast that W. P. Carey will post 5.24 EPS for the current year.

The business also recently disclosed a quarterly dividend, which was paid on Thursday, April 14th. Investors of record on Thursday, March 31st were issued a $1.057 dividend. This represents a $4.23 dividend on an annualized basis and a yield of 5.30%. This is an increase from W. P. Carey’s previous quarterly dividend of $1.06. The ex-dividend date of this dividend was Wednesday, March 30th. W. P. Carey’s dividend payout ratio is presently 153.26%. 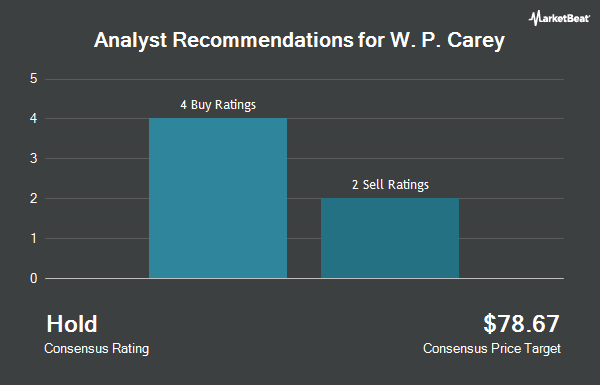 Complete the form below to receive the latest headlines and analysts' recommendations for W. P. Carey with our free daily email newsletter: