Alphabet Inc. (NASDAQ:GOOGL) Given Consensus Recommendation of “Buy” by Analysts

Shares of Alphabet Inc. (NASDAQ:GOOGL – Get Rating) have been given a consensus rating of “Buy” by the forty research firms that are covering the firm, Marketbeat Ratings reports. Four equities research analysts have rated the stock with a hold recommendation, thirty-one have given a buy recommendation and one has issued a strong buy recommendation on the company. The average 12 month target price among brokerages that have updated their coverage on the stock in the last year is $3,314.08.

Shares of Alphabet are scheduled to split on the morning of Monday, July 18th. The 20-1 split was announced on Tuesday, February 1st. The newly created shares will be distributed to shareholders after the closing bell on Friday, July 15th.

Alphabet (NASDAQ:GOOGL – Get Rating) last announced its earnings results on Tuesday, April 26th. The information services provider reported $24.62 earnings per share for the quarter, missing analysts’ consensus estimates of $25.51 by ($0.89). Alphabet had a return on equity of 30.18% and a net margin of 27.57%. During the same period in the prior year, the business earned $26.29 earnings per share. As a group, research analysts anticipate that Alphabet will post 112.62 EPS for the current fiscal year. 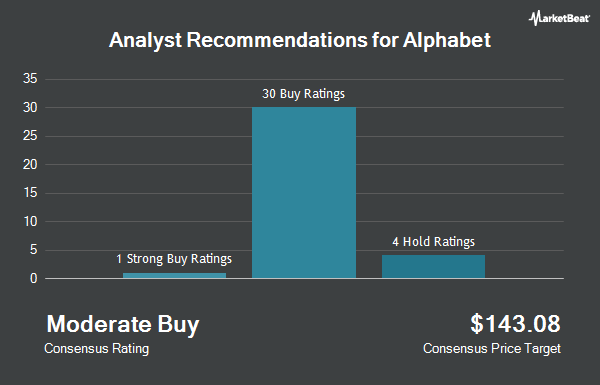 CTI BioPharma Corp. Given Consensus Recommendation of “Buy” by Analysts

Ameren Co. Given Average Rating of “Hold” by Brokerages

Gentherm Incorporated Given Consensus Recommendation of “Buy” by Brokerages

Victoria’s Secret & Co. Given Consensus Rating of “Buy” by Brokerages