Brokerages forecast that German American Bancorp, Inc. (NASDAQ:GABC – Get Rating) will report sales of $62.60 million for the current fiscal quarter, Zacks Investment Research reports. Three analysts have issued estimates for German American Bancorp’s earnings. The lowest sales estimate is $59.90 million and the highest is $64.90 million. German American Bancorp posted sales of $53.78 million during the same quarter last year, which would indicate a positive year over year growth rate of 16.4%. The firm is scheduled to announce its next quarterly earnings results on Monday, January 1st.

On average, analysts expect that German American Bancorp will report full year sales of $254.23 million for the current fiscal year, with estimates ranging from $243.20 million to $263.50 million. For the next fiscal year, analysts forecast that the business will post sales of $248.80 million, with estimates ranging from $200.80 million to $283.60 million. Zacks Investment Research’s sales averages are a mean average based on a survey of sell-side analysts that follow German American Bancorp.

The company also recently declared a quarterly dividend, which will be paid on Friday, May 20th. Stockholders of record on Tuesday, May 10th will be paid a dividend of $0.23 per share. This represents a $0.92 annualized dividend and a dividend yield of 2.61%. The ex-dividend date is Monday, May 9th. German American Bancorp’s dividend payout ratio (DPR) is 33.45%.

In other news, Director Thomas W. Seger purchased 8,000 shares of the firm’s stock in a transaction dated Tuesday, February 22nd. The shares were acquired at an average price of $36.93 per share, with a total value of $295,440.00. The purchase was disclosed in a legal filing with the SEC, which is available through this link. Insiders have bought a total of 8,204 shares of company stock worth $303,339 in the last three months. Corporate insiders own 6.70% of the company’s stock.

About German American Bancorp (Get Rating) 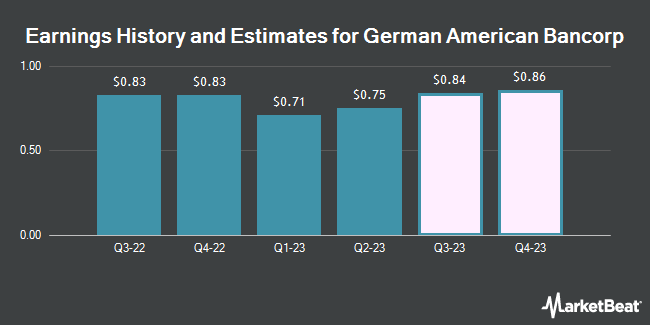 $0.14 Earnings Per Share Expected for iHeartMedia, Inc. This Quarter

Complete the form below to receive the latest headlines and analysts' recommendations for German American Bancorp with our free daily email newsletter: