Costco Wholesale (NASDAQ:COST – Get Rating) last issued its quarterly earnings data on Thursday, March 3rd. The retailer reported $2.92 earnings per share (EPS) for the quarter, topping analysts’ consensus estimates of $2.74 by $0.18. The company had revenue of $51.90 billion for the quarter, compared to the consensus estimate of $51.51 billion. Costco Wholesale had a return on equity of 30.10% and a net margin of 2.62%. The firm’s revenue was up 15.9% compared to the same quarter last year. During the same quarter last year, the business posted $2.14 earnings per share.

The firm also recently declared a quarterly dividend, which will be paid on Friday, May 13th. Investors of record on Friday, April 29th will be issued a dividend of $0.90 per share. This represents a $3.60 dividend on an annualized basis and a yield of 0.70%. The ex-dividend date is Thursday, April 28th. This is an increase from Costco Wholesale’s previous quarterly dividend of $0.79. Costco Wholesale’s payout ratio is currently 29.01%.

Costco Wholesale Corporation, together with its subsidiaries, engages in the operation of membership warehouses in the United States, Puerto Rico, Canada, the United Kingdom, Mexico, Japan, Korea, Australia, Spain, France, Iceland, China, and Taiwan. It offers branded and private-label products in a range of merchandise categories. 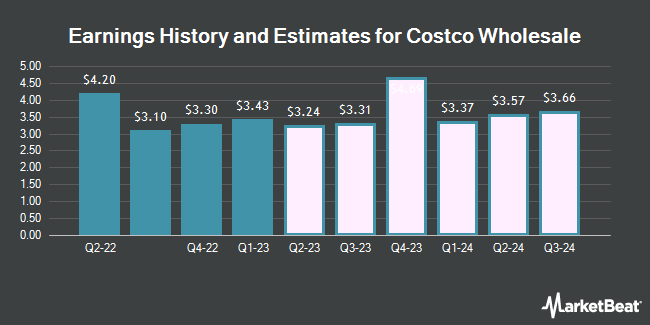 Universal Electronics Inc. Given Consensus Recommendation of “Buy” by Brokerages

Complete the form below to receive the latest headlines and analysts' recommendations for Costco Wholesale with our free daily email newsletter: