Ecolab Inc. (NYSE:ECL – Get Rating) announced a quarterly dividend on Thursday, May 5th, RTT News reports. Investors of record on Tuesday, June 21st will be given a dividend of 0.51 per share by the basic materials company on Friday, July 15th. This represents a $2.04 dividend on an annualized basis and a yield of 1.22%.

Ecolab (NYSE:ECL – Get Rating) last announced its quarterly earnings data on Tuesday, April 26th. The basic materials company reported $0.82 earnings per share (EPS) for the quarter, missing the consensus estimate of $0.83 by ($0.01). The firm had revenue of $3.27 billion during the quarter, compared to analysts’ expectations of $3.19 billion. Ecolab had a return on equity of 19.35% and a net margin of 8.45%. The company’s revenue for the quarter was up 13.2% compared to the same quarter last year. During the same quarter in the previous year, the business earned $0.81 earnings per share. Analysts predict that Ecolab will post 5.2 EPS for the current fiscal year.

In other news, Director Tracy B. Mckibben purchased 1,475 shares of the company’s stock in a transaction dated Friday, April 29th. The shares were acquired at an average cost of $170.00 per share, for a total transaction of $250,750.00. Following the completion of the purchase, the director now directly owns 6,746 shares in the company, valued at approximately $1,146,820. The transaction was disclosed in a legal filing with the SEC, which is available through this link. Also, Director Jeffrey M. Ettinger acquired 5,000 shares of Ecolab stock in a transaction that occurred on Thursday, February 17th. The stock was purchased at an average price of $179.39 per share, with a total value of $896,950.00. The disclosure for this purchase can be found here. 1.04% of the stock is owned by company insiders.

About Ecolab (Get Rating) 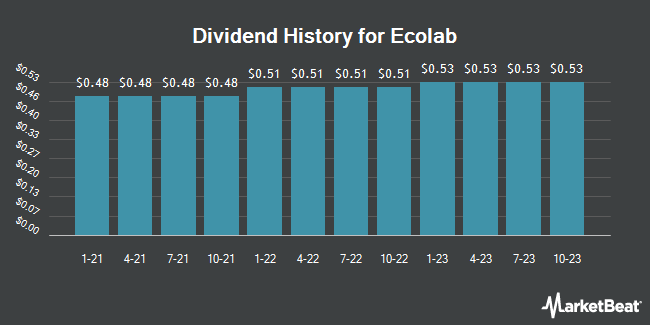