Franklin Resources (NYSE:BEN – Get Rating) last issued its earnings results on Tuesday, May 3rd. The closed-end fund reported $0.96 earnings per share (EPS) for the quarter, topping analysts’ consensus estimates of $0.81 by $0.15. Franklin Resources had a return on equity of 18.48% and a net margin of 22.02%. The business had revenue of $2.08 billion for the quarter, compared to analysts’ expectations of $2.08 billion. During the same period in the previous year, the firm posted $0.79 EPS. The company’s quarterly revenue was up .2% on a year-over-year basis.

The company also recently announced a quarterly dividend, which was paid on Thursday, April 14th. Shareholders of record on Thursday, March 31st were given a $0.29 dividend. This represents a $1.16 annualized dividend and a yield of 4.63%. The ex-dividend date of this dividend was Wednesday, March 30th. Franklin Resources’s payout ratio is currently 31.18%.

In other news, insider Franklin Resources Inc purchased 998,370 shares of Franklin Resources stock in a transaction dated Friday, April 1st. The stock was acquired at an average cost of $12.27 per share, for a total transaction of $12,249,999.90. Following the acquisition, the insider now directly owns 14,079,687 shares in the company, valued at $172,757,759.49. The transaction was disclosed in a legal filing with the Securities & Exchange Commission, which is available at this hyperlink. 23.30% of the stock is owned by company insiders. 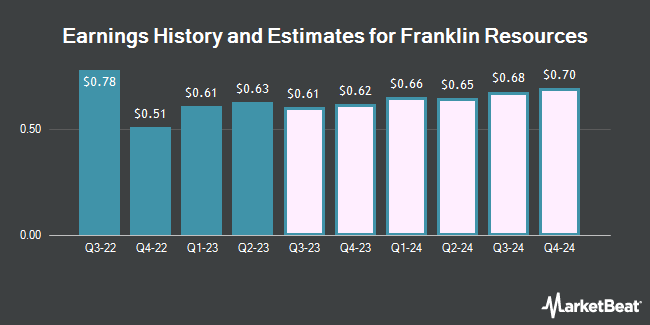