Zacks Investment Research upgraded shares of Freshpet (NASDAQ:FRPT – Get Rating) from a sell rating to a hold rating in a research report report published on Thursday morning, Zacks.com reports.

According to Zacks, “Freshpet Inc. is a pet food company. The company manufactures and markets natural fresh foods, refrigerated meals, and treats for dogs and cats in the United States and Canada. Freshpet provides meats- based recipes, such as chicken, beef, lamb and salmon; fruits and vegetables, such as carrots, peas and leafy green vegetables, and high-fiber grains, such as brown rice, oats and barley. It sells its products under the Freshpet, Dognation, and Dog Joy brand names. Freshpet Inc. is headquartered in Secaucus, New Jersey. “

Freshpet (NASDAQ:FRPT – Get Rating) last posted its quarterly earnings data on Monday, May 2nd. The company reported ($0.40) EPS for the quarter, missing analysts’ consensus estimates of ($0.36) by ($0.04). Freshpet had a negative return on equity of 5.04% and a negative net margin of 7.83%. During the same period last year, the business earned ($0.26) earnings per share. Equities research analysts expect that Freshpet will post -0.53 EPS for the current fiscal year. 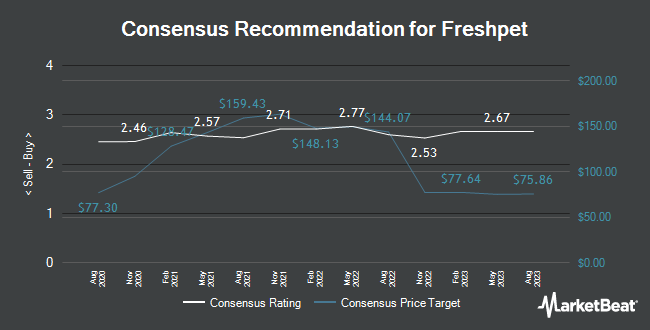 $26.00 Million in Sales Expected for REGENXBIO Inc. This Quarter

$1.34 Billion in Sales Expected for Keysight Technologies, Inc. This Quarter