ITT Inc. (NYSE:ITT) Given Consensus Rating of “Buy” by Brokerages

Shares of ITT Inc. (NYSE:ITT – Get Rating) have been assigned an average recommendation of “Buy” from the fifteen brokerages that are presently covering the firm, Marketbeat Ratings reports. Five investment analysts have rated the stock with a hold recommendation and six have assigned a buy recommendation to the company. The average 1 year price objective among analysts that have updated their coverage on the stock in the last year is $102.55.

In related news, CEO Luca Savi sold 10,290 shares of the firm’s stock in a transaction dated Thursday, February 17th. The shares were sold at an average price of $87.44, for a total value of $899,757.60. The sale was disclosed in a legal filing with the Securities & Exchange Commission, which is accessible through the SEC website. 0.50% of the stock is owned by company insiders.

ITT (NYSE:ITT – Get Rating) last announced its quarterly earnings data on Tuesday, May 3rd. The conglomerate reported $0.97 EPS for the quarter, meeting analysts’ consensus estimates of $0.97. ITT had a net margin of 10.92% and a return on equity of 15.90%. The company had revenue of $726.20 million for the quarter, compared to the consensus estimate of $695.93 million. During the same period in the prior year, the firm posted $1.06 EPS. The company’s quarterly revenue was up 4.0% compared to the same quarter last year. As a group, research analysts expect that ITT will post 4.41 earnings per share for the current fiscal year.

The company also recently announced a quarterly dividend, which was paid on Monday, April 4th. Stockholders of record on Wednesday, March 9th were paid a $0.264 dividend. This represents a $1.06 annualized dividend and a dividend yield of 1.43%. The ex-dividend date of this dividend was Tuesday, March 8th. This is a boost from ITT’s previous quarterly dividend of $0.22. ITT’s dividend payout ratio (DPR) is 29.94%. 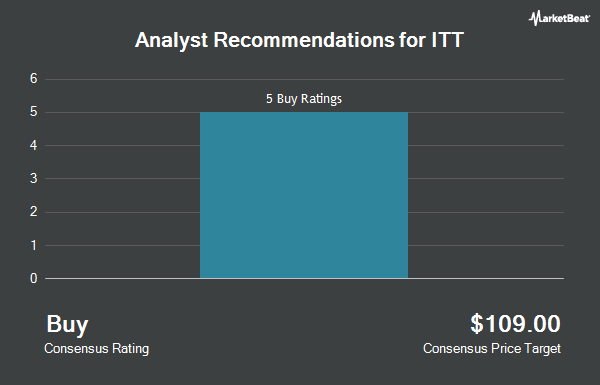