Kemper Co. (NYSE:KMPR – Get Rating) announced a quarterly dividend on Wednesday, May 4th, Zacks reports. Investors of record on Monday, May 16th will be paid a dividend of 0.31 per share by the insurance provider on Tuesday, May 31st. This represents a $1.24 dividend on an annualized basis and a yield of 2.49%. The ex-dividend date is Friday, May 13th.

Kemper (NYSE:KMPR – Get Rating) last posted its quarterly earnings data on Monday, May 2nd. The insurance provider reported ($0.94) earnings per share (EPS) for the quarter, topping analysts’ consensus estimates of ($1.17) by $0.23. Kemper had a negative return on equity of 9.23% and a negative net margin of 5.79%. During the same period in the prior year, the business earned $1.31 earnings per share. Equities analysts anticipate that Kemper will post -0.54 EPS for the current year.

In other news, Director George N. Cochran acquired 1,000 shares of Kemper stock in a transaction on Monday, February 14th. The stock was acquired at an average cost of $50.00 per share, for a total transaction of $50,000.00. The acquisition was disclosed in a document filed with the SEC, which is accessible through this link. 0.60% of the stock is currently owned by company insiders.

KMPR has been the subject of a number of research reports. StockNews.com initiated coverage on Kemper in a report on Thursday, March 31st. They issued a “hold” rating for the company. Zacks Investment Research downgraded Kemper from a “buy” rating to a “hold” rating in a report on Friday. Credit Suisse Group initiated coverage on Kemper in a report on Thursday, April 28th. They issued an “underperform” rating and a $44.00 price objective for the company. Finally, Raymond James downgraded Kemper from an “outperform” rating to a “market perform” rating in a report on Tuesday, February 1st. One equities research analyst has rated the stock with a sell rating and four have given a hold rating to the company’s stock. According to data from MarketBeat, the stock has an average rating of “Hold” and an average price target of $60.50. 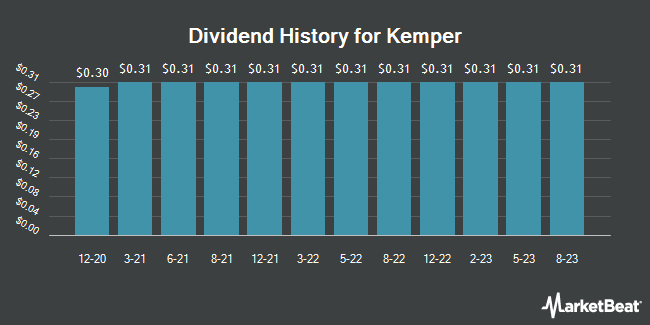