Regency Centers Co. (NASDAQ:REG – Get Rating) announced a quarterly dividend on Thursday, May 5th, Wall Street Journal reports. Shareholders of record on Wednesday, June 15th will be paid a dividend of 0.625 per share on Wednesday, July 6th. This represents a $2.50 dividend on an annualized basis and a yield of 3.59%. The ex-dividend date is Tuesday, June 14th.

Regency Centers (NASDAQ:REG – Get Rating) last issued its quarterly earnings data on Tuesday, May 3rd. The company reported $1.13 earnings per share (EPS) for the quarter, topping analysts’ consensus estimates of $0.44 by $0.69. Regency Centers had a net margin of 39.83% and a return on equity of 7.34%. During the same period in the prior year, the business posted $0.90 earnings per share. On average, sell-side analysts forecast that Regency Centers will post 3.87 EPS for the current fiscal year.

In other news, Director Nicholas Andrew Wibbenmeyer sold 4,330 shares of the business’s stock in a transaction dated Wednesday, March 9th. The stock was sold at an average price of $69.81, for a total value of $302,277.30. The transaction was disclosed in a document filed with the Securities & Exchange Commission, which is available at the SEC website. Corporate insiders own 1.00% of the company’s stock.

About Regency Centers (Get Rating) 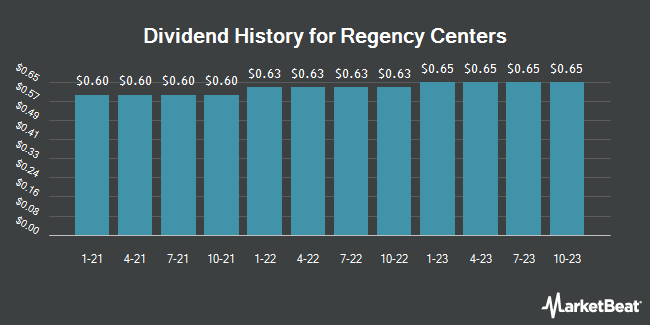