Textainer Group Holdings Limited (NYSE:TGH – Get Rating) declared a quarterly dividend on Thursday, May 5th, Zacks reports. Investors of record on Friday, June 3rd will be given a dividend of 0.25 per share by the transportation company on Wednesday, June 15th. This represents a $1.00 annualized dividend and a yield of 2.92%. The ex-dividend date of this dividend is Thursday, June 2nd.

Textainer Group (NYSE:TGH – Get Rating) last posted its quarterly earnings data on Thursday, February 10th. The transportation company reported $1.46 EPS for the quarter, beating the consensus estimate of $1.26 by $0.20. Textainer Group had a return on equity of 20.65% and a net margin of 37.21%. The business had revenue of $198.22 million for the quarter, compared to the consensus estimate of $198.26 million. During the same quarter in the prior year, the business earned $0.81 earnings per share. As a group, equities research analysts forecast that Textainer Group will post 5.92 earnings per share for the current fiscal year.

About Textainer Group (Get Rating)

Textainer Group Holdings Limited, through its subsidiaries, purchases, owns, manages, leases, and disposes a fleet of intermodal containers worldwide. It operates through three segments: Container Ownership, Container Management, and Container Resale. The company's containers include standard and specialized dry freight, and refrigerated containers, as well as other special-purpose containers, which include tank, 45', pallet-wide, and other types of containers. 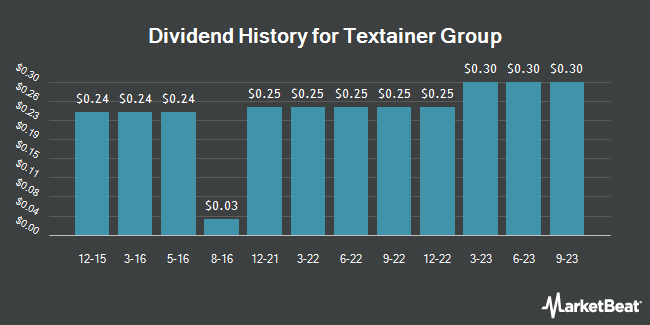 Denali Therapeutics Inc. Expected to Announce Earnings of -$0.57 Per Share

Contrasting The Arena Group and Its Rivals

EBET vs. Its Rivals Head-To-Head Comparison

Complete the form below to receive the latest headlines and analysts' recommendations for Textainer Group with our free daily email newsletter: