Wingstop Inc. (NASDAQ:WING – Get Rating) announced a quarterly dividend on Wednesday, May 4th, Zacks reports. Stockholders of record on Friday, May 20th will be paid a dividend of 0.17 per share by the restaurant operator on Friday, June 10th. This represents a $0.68 annualized dividend and a dividend yield of 0.77%. The ex-dividend date of this dividend is Thursday, May 19th.

Wingstop (NASDAQ:WING – Get Rating) last posted its quarterly earnings data on Wednesday, May 4th. The restaurant operator reported $0.34 earnings per share (EPS) for the quarter, missing analysts’ consensus estimates of $0.36 by ($0.02). Wingstop had a negative return on equity of 12.62% and a net margin of 15.10%. The company had revenue of $76.20 million for the quarter, compared to analysts’ expectations of $86.16 million. During the same quarter last year, the business posted $0.44 EPS. The business’s quarterly revenue was up 7.8% on a year-over-year basis. On average, equities research analysts predict that Wingstop will post 1.54 earnings per share for the current year. 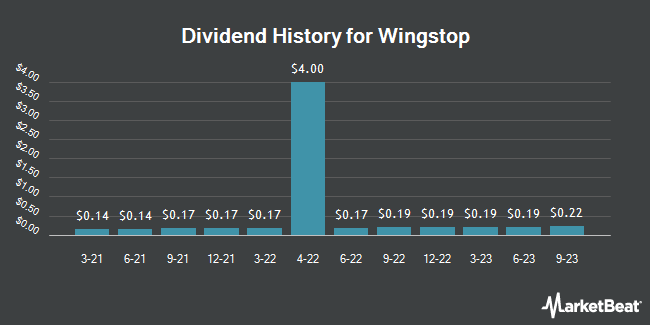 $146.68 Million in Sales Expected for Forrester Research, Inc. This Quarter