According to Zacks, analysts expect that Live Nation Entertainment will report full-year earnings of $0.40 per share for the current year, with EPS estimates ranging from ($0.56) to $1.51. For the next fiscal year, analysts anticipate that the company will report earnings of $1.20 per share, with EPS estimates ranging from $0.50 to $2.58. Zacks Investment Research’s earnings per share averages are an average based on a survey of sell-side research firms that that provide coverage for Live Nation Entertainment.

Live Nation Entertainment (NYSE:LYV – Get Rating) last announced its earnings results on Thursday, May 5th. The company reported ($0.39) EPS for the quarter, beating analysts’ consensus estimates of ($0.94) by $0.55. The firm had revenue of $1.80 billion for the quarter, compared to analyst estimates of $1.88 billion. During the same period in the previous year, the company earned ($1.44) EPS. Live Nation Entertainment’s revenue was up 520.4% compared to the same quarter last year. 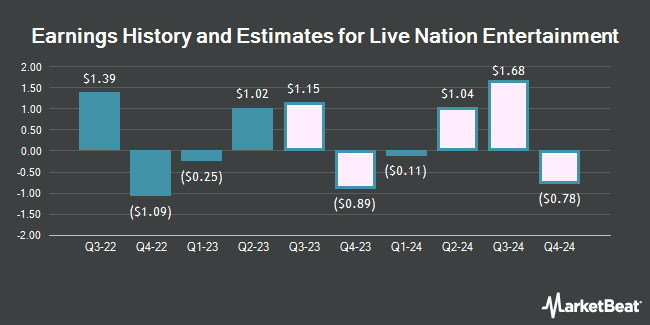 $130.49 Million in Sales Expected for Physicians Realty Trust This Quarter

$3.14 Billion in Sales Expected for Discover Financial Services This Quarter

Complete the form below to receive the latest headlines and analysts' recommendations for Live Nation Entertainment with our free daily email newsletter: