Equities research analysts predict that Cyxtera Technologies, Inc. (NASDAQ:CYXT – Get Rating) will report earnings of ($0.21) per share for the current fiscal quarter, according to Zacks. Three analysts have issued estimates for Cyxtera Technologies’ earnings, with the highest EPS estimate coming in at ($0.19) and the lowest estimate coming in at ($0.24). The business is expected to announce its next earnings results before the market opens on Monday, January 1st.

According to Zacks, analysts expect that Cyxtera Technologies will report full-year earnings of ($0.79) per share for the current year, with EPS estimates ranging from ($0.91) to ($0.64). For the next financial year, analysts expect that the business will report earnings of ($0.64) per share, with EPS estimates ranging from ($0.71) to ($0.54). Zacks Investment Research’s EPS averages are a mean average based on a survey of research firms that cover Cyxtera Technologies.

Cyxtera Technologies (NASDAQ:CYXT – Get Rating) last released its quarterly earnings data on Tuesday, March 22nd. The company reported ($0.25) earnings per share (EPS) for the quarter, topping the consensus estimate of ($0.28) by $0.03. The company had revenue of $178.40 million for the quarter, compared to analyst estimates of $178.71 million. The company’s quarterly revenue was up 3.3% compared to the same quarter last year. 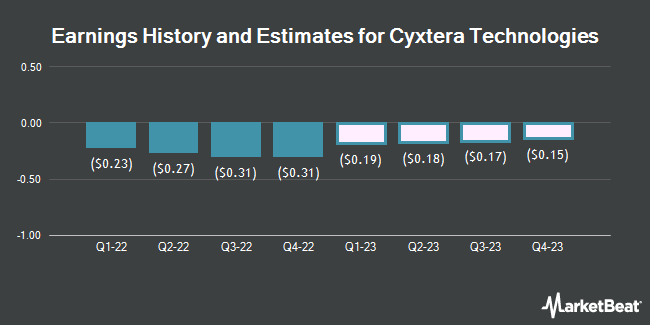