California Resources (NYSE:CRC – Get Rating) released its quarterly earnings data on Thursday. The oil and gas producer reported $1.13 earnings per share (EPS) for the quarter, missing analysts’ consensus estimates of $1.32 by ($0.19), Briefing.com reports. California Resources had a return on equity of 42.74% and a net margin of 32.40%. The firm had revenue of $153.00 million during the quarter, compared to the consensus estimate of $443.19 million. During the same period in the previous year, the firm earned $1.22 EPS. The business’s revenue was down 57.9% compared to the same quarter last year.

The business also recently announced a quarterly dividend, which will be paid on Thursday, June 16th. Stockholders of record on Wednesday, June 1st will be issued a $0.17 dividend. This represents a $0.68 dividend on an annualized basis and a dividend yield of 1.57%. The ex-dividend date of this dividend is Tuesday, May 31st. California Resources’s dividend payout ratio (DPR) is 10.64%.

About California Resources (Get Rating)

California Resources Corporation operates as an independent oil and natural gas company. The company explores for, produces, gathers, processes, and markets crude oil, natural gas, and natural gas liquids for marketers, California refineries, and other purchasers that have access to transportation and storage facilities. 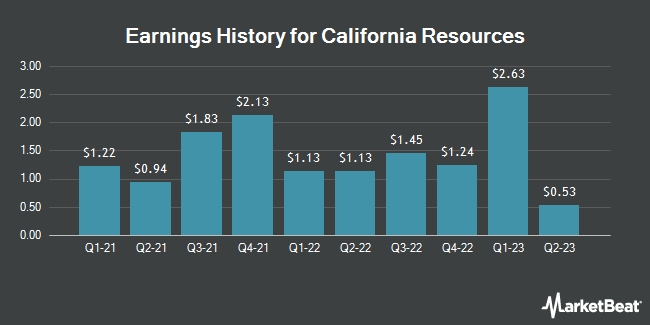 Complete the form below to receive the latest headlines and analysts' recommendations for California Resources with our free daily email newsletter: