Hanesbrands (NYSE:HBI – Get Rating) announced its earnings results on Thursday. The textile maker reported $0.34 EPS for the quarter, beating analysts’ consensus estimates of $0.28 by $0.06, MarketWatch Earnings reports. The firm had revenue of $1.58 billion for the quarter, compared to analysts’ expectations of $1.54 billion. Hanesbrands had a return on equity of 108.10% and a net margin of 1.14%. Hanesbrands’s quarterly revenue was up 4.5% on a year-over-year basis. During the same quarter in the prior year, the firm earned $0.39 EPS. Hanesbrands updated its Q2 guidance to $0.32-0.36 EPS and its FY22 guidance to $1.64-1.81 EPS.

The firm also recently announced a quarterly dividend, which will be paid on Tuesday, May 31st. Stockholders of record on Tuesday, May 10th will be given a dividend of $0.15 per share. This represents a $0.60 dividend on an annualized basis and a dividend yield of 4.76%. The ex-dividend date is Monday, May 9th. Hanesbrands’s payout ratio is 45.80%.

Hanesbrands announced that its Board of Directors has initiated a share buyback program on Thursday, February 3rd that allows the company to buyback $600.00 million in outstanding shares. This buyback authorization allows the textile maker to purchase up to 10.8% of its shares through open market purchases. Shares buyback programs are usually an indication that the company’s board believes its shares are undervalued. 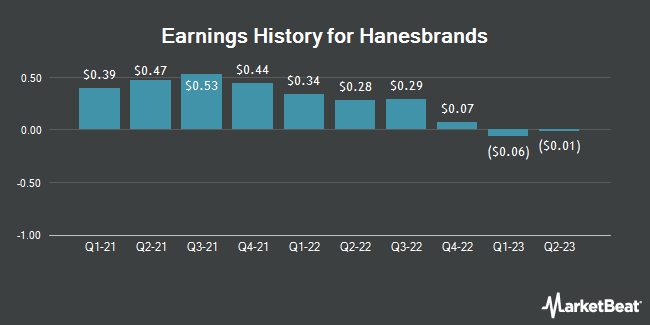