IMV (NASDAQ:IMV – Get Rating) will be issuing its quarterly earnings data before the market opens on Friday, May 13th. Analysts expect the company to announce earnings of ($0.12) per share for the quarter.

IMV (NASDAQ:IMV – Get Rating) last released its quarterly earnings results on Thursday, March 17th. The company reported ($0.14) EPS for the quarter, missing analysts’ consensus estimates of ($0.11) by ($0.03). The company had revenue of $0.04 million during the quarter. IMV had a negative net margin of 19,535.29% and a negative return on equity of 145.26%. During the same period in the prior year, the firm earned ($0.11) earnings per share. On average, analysts expect IMV to post $0 EPS for the current fiscal year and $0 EPS for the next fiscal year.

IMV has been the subject of a number of analyst reports. Raymond James lowered their price target on IMV from $1.75 to $1.50 and set a “market perform” rating for the company in a research report on Friday, March 18th. Zacks Investment Research downgraded IMV from a “hold” rating to a “sell” rating in a research note on Tuesday, March 22nd. One analyst has rated the stock with a sell rating, one has assigned a hold rating and two have given a buy rating to the stock. Based on data from MarketBeat.com, the company has an average rating of “Hold” and an average target price of $2.22.

IMV Inc operates as a clinical-stage immuno-oncology company. The company develops a portfolio of therapies based on DPX its immune-educating technology platform for treatment of solid and hematological cancers. The company's lead drug candidate includes maveropepimut-S, a DPX-based immunotherapy that targets survivin-expressing cells that is Phase II clinical trials for diffuse large B cell lymphoma; ovarian cancer; and bladder, liver, and microsatellite instability high tumors, as well as in Phase I clinical trial for breast cancer. 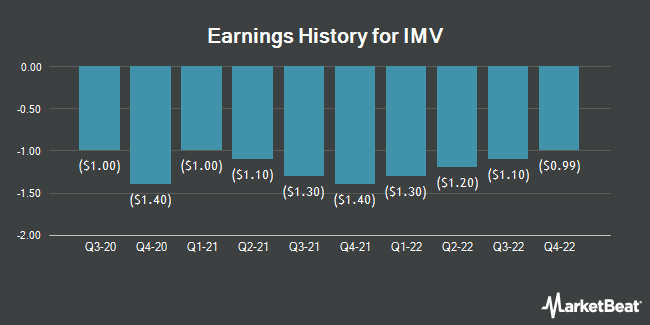 Receive News & Ratings for IMV Daily - Enter your email address below to receive a concise daily summary of the latest news and analysts' ratings for IMV and related companies with MarketBeat.com's FREE daily email newsletter.

$8.85 Billion in Sales Expected for 3M This Quarter

$452.02 Million in Sales Expected for United Therapeutics Co. This Quarter

Harley-Davidson, Inc. Expected to Announce Earnings of $1.44 Per Share

Complete the form below to receive the latest headlines and analysts' recommendations for IMV with our free daily email newsletter: