Whitecap Resources Inc. (TSE:WCP – Get Rating) Senior Officer Joel Maxwell Armstrong sold 35,000 shares of Whitecap Resources stock in a transaction dated Tuesday, May 3rd. The shares were sold at an average price of C$10.41, for a total transaction of C$364,350.00. Following the sale, the insider now owns 286,998 shares of the company’s stock, valued at approximately C$2,987,649.18.

Whitecap Resources (TSE:WCP – Get Rating) last announced its quarterly earnings data on Thursday, February 24th. The company reported C$0.36 earnings per share for the quarter, beating analysts’ consensus estimates of C$0.24 by C$0.12. The firm had revenue of C$785.80 million during the quarter. As a group, equities research analysts expect that Whitecap Resources Inc. will post 1.49 earnings per share for the current year.

The company also recently announced a monthly dividend, which was paid on Tuesday, March 15th. Investors of record on Tuesday, March 15th were given a $0.0225 dividend. The ex-dividend date of this dividend was Friday, February 25th. This represents a $0.27 dividend on an annualized basis and a yield of 2.49%. Whitecap Resources’s dividend payout ratio is currently 8.06%. 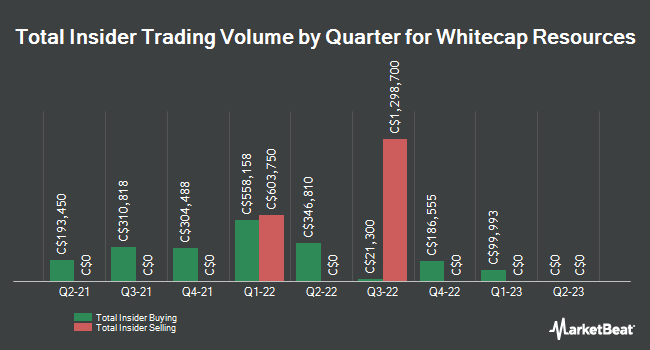