NIKE, Inc. (NYSE:NKE – Get Rating) announced a quarterly dividend on Thursday, May 5th, Zacks reports. Stockholders of record on Monday, June 6th will be given a dividend of 0.305 per share by the footwear maker on Friday, July 1st. This represents a $1.22 annualized dividend and a dividend yield of 1.07%. The ex-dividend date is Friday, June 3rd.

NIKE (NYSE:NKE – Get Rating) last released its earnings results on Monday, March 21st. The footwear maker reported $0.87 earnings per share for the quarter, topping the consensus estimate of $0.71 by $0.16. The business had revenue of $10.90 billion during the quarter, compared to the consensus estimate of $10.61 billion. NIKE had a return on equity of 43.04% and a net margin of 13.06%. The business’s revenue for the quarter was up 4.8% compared to the same quarter last year. During the same period last year, the company earned $0.90 earnings per share. As a group, equities research analysts predict that NIKE will post 3.72 EPS for the current fiscal year. 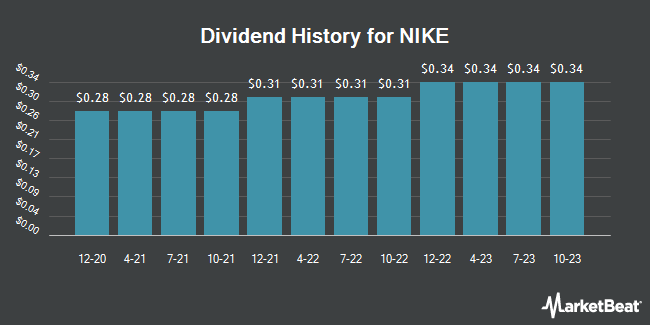 Graphite Bio, Inc. Given Average Recommendation of “Hold” by Brokerages

Unibail-Rodamco-Westfield Given Consensus Rating of “Hold” by Brokerages