Qorvo (NASDAQ:QRVO – Get Rating) had its target price decreased by equities research analysts at Craig Hallum from $225.00 to $180.00 in a research report issued on Thursday, The Fly reports. Craig Hallum’s target price would indicate a potential upside of 68.04% from the company’s previous close.

Qorvo (NASDAQ:QRVO – Get Rating) last announced its earnings results on Wednesday, May 4th. The semiconductor company reported $3.12 EPS for the quarter, topping the consensus estimate of $2.71 by $0.41. The firm had revenue of $1.17 billion for the quarter, compared to the consensus estimate of $1.15 billion. Qorvo had a net margin of 24.60% and a return on equity of 27.27%. The business’s quarterly revenue was up 8.7% on a year-over-year basis. During the same quarter last year, the firm posted $2.59 EPS. As a group, analysts forecast that Qorvo will post 12.09 EPS for the current fiscal year.

In other Qorvo news, VP Paul J. Fego sold 861 shares of the business’s stock in a transaction dated Tuesday, February 15th. The shares were sold at an average price of $131.78, for a total value of $113,462.58. The transaction was disclosed in a document filed with the SEC, which can be accessed through the SEC website. 0.52% of the stock is owned by insiders.

About Qorvo (Get Rating) 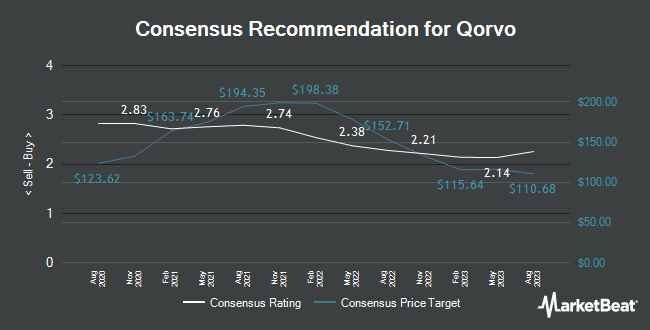