$81.20 Million in Sales Expected for IMAX Co. (NYSE:IMAX) This Quarter

Equities research analysts expect IMAX Co. (NYSE:IMAX – Get Rating) to announce $81.20 million in sales for the current quarter, Zacks Investment Research reports. Four analysts have issued estimates for IMAX’s earnings, with the highest sales estimate coming in at $86.08 million and the lowest estimate coming in at $77.92 million. IMAX reported sales of $50.96 million during the same quarter last year, which indicates a positive year-over-year growth rate of 59.3%. The company is scheduled to announce its next earnings results on Monday, January 1st.

According to Zacks, analysts expect that IMAX will report full year sales of $334.36 million for the current financial year, with estimates ranging from $328.79 million to $340.47 million. For the next fiscal year, analysts anticipate that the business will report sales of $387.30 million, with estimates ranging from $382.00 million to $396.35 million. Zacks’ sales calculations are an average based on a survey of research analysts that that provide coverage for IMAX.

IMAX (NYSE:IMAX – Get Rating) last posted its earnings results on Wednesday, February 23rd. The company reported $0.21 EPS for the quarter, topping analysts’ consensus estimates of $0.06 by $0.15. The business had revenue of $108.57 million for the quarter, compared to analysts’ expectations of $87.16 million. IMAX had a negative return on equity of 5.49% and a negative net margin of 7.64%.

Several research analysts recently issued reports on IMAX shares. StockNews.com assumed coverage on IMAX in a research report on Thursday, March 31st. They set a “hold” rating for the company. TheStreet cut shares of IMAX from a “c” rating to a “d+” rating in a research report on Friday, April 29th. Barrington Research lowered their price objective on IMAX from $25.00 to $20.00 in a report on Monday, May 2nd. Finally, Benchmark reaffirmed a “buy” rating and set a $28.00 target price on shares of IMAX in a report on Thursday, February 24th. One analyst has rated the stock with a sell rating, two have assigned a hold rating and six have assigned a buy rating to the company’s stock. According to data from MarketBeat, IMAX currently has an average rating of “Buy” and an average target price of $23.95.

In other news, EVP Jacqueline Bassani sold 6,000 shares of the business’s stock in a transaction dated Wednesday, March 16th. The stock was sold at an average price of $18.13, for a total value of $108,780.00. The sale was disclosed in a legal filing with the Securities & Exchange Commission, which is available at the SEC website. 23.20% of the stock is currently owned by corporate insiders. 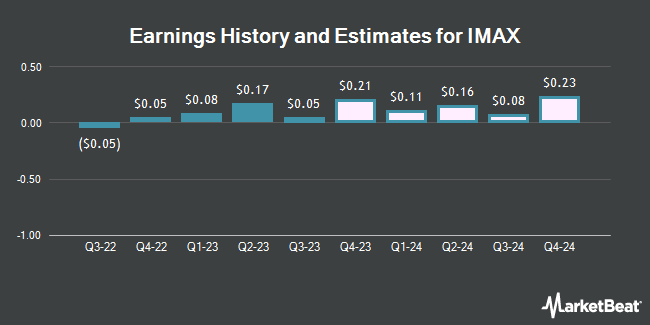