Equities analysts predict that Heron Therapeutics, Inc. (NASDAQ:HRTX – Get Rating) will announce $22.00 million in sales for the current fiscal quarter, according to Zacks. Two analysts have issued estimates for Heron Therapeutics’ earnings. The highest sales estimate is $23.00 million and the lowest is $21.00 million. Heron Therapeutics reported sales of $20.02 million during the same quarter last year, which would indicate a positive year over year growth rate of 9.9%. The company is expected to issue its next earnings results after the market closes on Monday, January 1st.

According to Zacks, analysts expect that Heron Therapeutics will report full-year sales of $112.40 million for the current financial year, with estimates ranging from $105.00 million to $119.80 million. For the next financial year, analysts expect that the firm will report sales of $174.75 million, with estimates ranging from $174.50 million to $175.00 million. Zacks Investment Research’s sales averages are an average based on a survey of sell-side research analysts that cover Heron Therapeutics.

Heron Therapeutics (NASDAQ:HRTX – Get Rating) last released its quarterly earnings results on Monday, February 28th. The biotechnology company reported ($0.54) earnings per share for the quarter, topping analysts’ consensus estimates of ($0.59) by $0.05. The company had revenue of $20.66 million during the quarter, compared to analysts’ expectations of $25.77 million. Heron Therapeutics had a negative return on equity of 159.70% and a negative net margin of 255.58%. Heron Therapeutics’s quarterly revenue was up .2% compared to the same quarter last year. During the same quarter in the prior year, the firm posted ($0.68) EPS.

About Heron Therapeutics (Get Rating)

Heron Therapeutics, Inc, a biotechnology company, engages in developing treatments to address unmet patient needs. The company's product candidates utilize its proprietary Biochronomer, a drug delivery technology, which delivers therapeutic levels of a range of short-acting pharmacological agents over a period from days to weeks with a single administration. 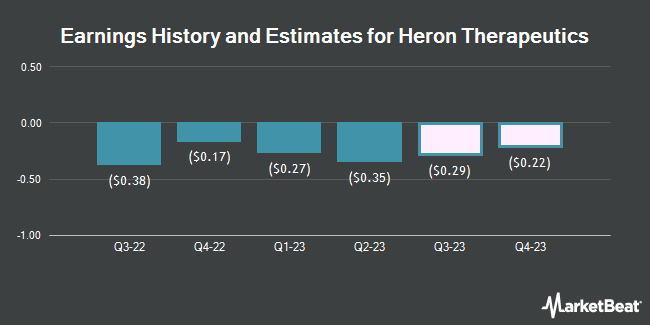 Complete the form below to receive the latest headlines and analysts' recommendations for Heron Therapeutics with our free daily email newsletter: