Dynavax Technologies (NASDAQ:DVAX – Get Rating) released its earnings results on Thursday. The biopharmaceutical company reported $0.22 EPS for the quarter, missing the consensus estimate of $0.24 by ($0.02), MarketWatch Earnings reports. Dynavax Technologies had a return on equity of 115.98% and a net margin of 23.12%. During the same quarter in the previous year, the company posted $0.01 earnings per share.

In other Dynavax Technologies news, SVP Robert Janssen sold 24,036 shares of the stock in a transaction dated Thursday, March 3rd. The stock was sold at an average price of $10.57, for a total value of $254,060.52. The transaction was disclosed in a legal filing with the Securities & Exchange Commission, which can be accessed through the SEC website. Also, COO David F. Novack sold 41,862 shares of the company’s stock in a transaction that occurred on Thursday, March 3rd. The shares were sold at an average price of $10.57, for a total transaction of $442,481.34. The disclosure for this sale can be found here. In the last 90 days, insiders have sold 170,496 shares of company stock valued at $1,801,527. 9.31% of the stock is owned by company insiders.

About Dynavax Technologies (Get Rating) 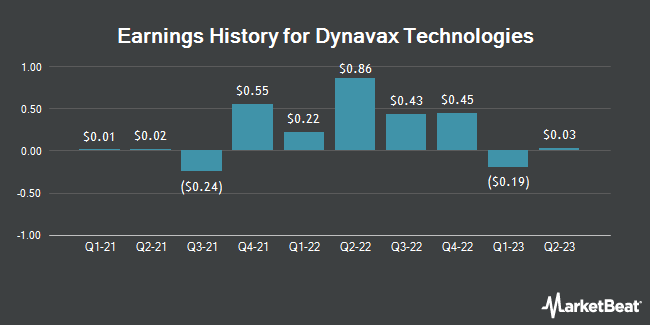 Complete the form below to receive the latest headlines and analysts' recommendations for Dynavax Technologies with our free daily email newsletter: