On average, analysts expect that Simmons First National will report full year earnings of $2.03 per share for the current fiscal year, with EPS estimates ranging from $1.82 to $2.32. For the next financial year, analysts anticipate that the company will report earnings of $2.43 per share, with EPS estimates ranging from $2.32 to $2.52. Zacks’ EPS averages are a mean average based on a survey of research analysts that cover Simmons First National.

Simmons First National (NASDAQ:SFNC – Get Rating) last released its quarterly earnings results on Thursday, April 28th. The bank reported $0.59 earnings per share for the quarter, topping analysts’ consensus estimates of $0.51 by $0.08. Simmons First National had a return on equity of 9.17% and a net margin of 31.68%. The company had revenue of $207.74 million during the quarter, compared to analysts’ expectations of $202.14 million. During the same quarter in the prior year, the firm posted $0.59 EPS. Simmons First National’s quarterly revenue was up 6.6% compared to the same quarter last year.

A number of equities research analysts recently issued reports on the stock. StockNews.com assumed coverage on shares of Simmons First National in a research note on Thursday, March 31st. They issued a “hold” rating on the stock. Piper Sandler lowered shares of Simmons First National from a “neutral” rating to an “underweight” rating and set a $26.00 target price on the stock. in a research report on Monday. Finally, Zacks Investment Research cut shares of Simmons First National from a “buy” rating to a “hold” rating in a research note on Wednesday, May 4th. One investment analyst has rated the stock with a sell rating and four have assigned a hold rating to the company. According to MarketBeat, the stock currently has a consensus rating of “Hold” and a consensus target price of $28.00.

The company also recently declared a quarterly dividend, which will be paid on Tuesday, July 5th. Investors of record on Wednesday, June 15th will be given a dividend of $0.19 per share. This represents a $0.76 annualized dividend and a dividend yield of 3.05%. The ex-dividend date is Tuesday, June 14th. Simmons First National’s payout ratio is 31.28%.

In other Simmons First National news, Director Marty Casteel acquired 4,000 shares of the company’s stock in a transaction that occurred on Tuesday, May 3rd. The stock was bought at an average price of $24.10 per share, with a total value of $96,400.00. Following the purchase, the director now owns 186,929 shares in the company, valued at $4,504,988.90. The transaction was disclosed in a legal filing with the Securities & Exchange Commission, which can be accessed through this link. Also, COO Robert A. Fehlman bought 5,000 shares of the firm’s stock in a transaction on Tuesday, May 3rd. The stock was acquired at an average cost of $24.00 per share, for a total transaction of $120,000.00. Following the completion of the purchase, the chief operating officer now directly owns 125,797 shares in the company, valued at $3,019,128. The disclosure for this purchase can be found here. Over the last three months, insiders purchased 24,000 shares of company stock valued at $576,850. 1.80% of the stock is owned by corporate insiders.

About Simmons First National (Get Rating) 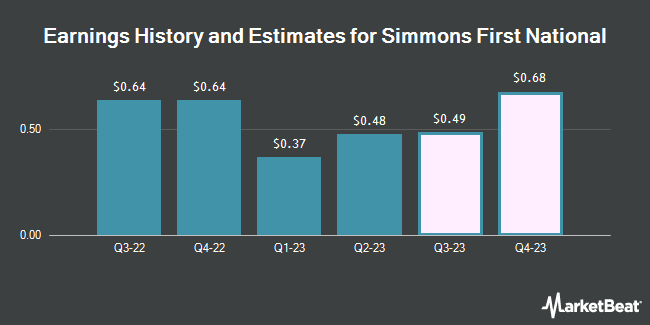