Cedar Fair, L.P. (NYSE:FUN – Get Rating) – Research analysts at B. Riley boosted their Q4 2022 EPS estimates for Cedar Fair in a note issued to investors on Thursday, May 5th. B. Riley analyst E. Wold now forecasts that the company will post earnings per share of ($0.06) for the quarter, up from their previous forecast of ($0.07). B. Riley also issued estimates for Cedar Fair’s Q1 2023 earnings at ($1.70) EPS.

Cedar Fair (NYSE:FUN – Get Rating) last announced its earnings results on Wednesday, May 4th. The company reported ($1.56) earnings per share for the quarter, beating analysts’ consensus estimates of ($1.96) by $0.40. The business had revenue of $99.00 million during the quarter, compared to analyst estimates of $76.28 million. During the same quarter last year, the business posted ($1.95) earnings per share. The business’s quarterly revenue was up 920.6% compared to the same quarter last year. 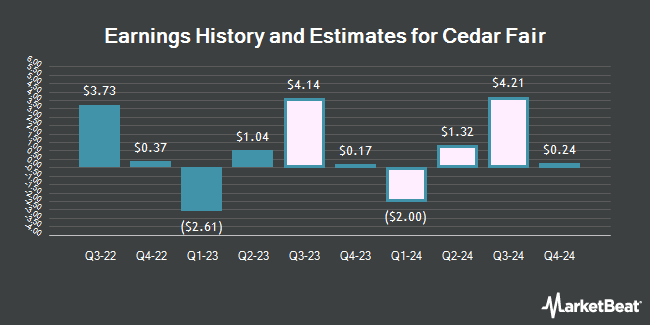 Analyzing DT Midstream and Its Peers

Head to Head Survey: N-able and Its Competitors

Complete the form below to receive the latest headlines and analysts' recommendations for Cedar Fair with our free daily email newsletter: