Biomea Fusion (NASDAQ:BMEA – Get Rating) was upgraded by Zacks Investment Research from a “sell” rating to a “hold” rating in a research note issued on Monday, Zacks.com reports.

According to Zacks, “Biomea Fusion Inc. is a preclinical-stage biopharmaceutical company. It is focused on the discovery, development and commercialization of irreversible small molecules to treat patients with genetically defined cancers. Biomea Fusion Inc. is based in REDWOOD CITY, Calif. “

Separately, HC Wainwright assumed coverage on shares of Biomea Fusion in a research note on Wednesday, January 12th. They issued a “buy” rating and a $13.00 price objective for the company. One analyst has rated the stock with a hold rating and five have issued a buy rating to the company’s stock. According to data from MarketBeat, Biomea Fusion currently has an average rating of “Buy” and an average price target of $23.00.

Biomea Fusion (NASDAQ:BMEA – Get Rating) last issued its earnings results on Monday, February 28th. The company reported ($0.51) earnings per share (EPS) for the quarter, missing analysts’ consensus estimates of ($0.45) by ($0.06). On average, equities analysts expect that Biomea Fusion will post -2.48 earnings per share for the current year.

Biomea Fusion, Inc, a biopharmaceutical company, focuses on the discovery and development of irreversible small molecules to treat patients with genetically defined cancers and metabolic diseases. Its lead product candidate is BMF-219, an orally bioavailable, potent, and selective irreversible inhibitor of menin, a transcriptional regulator in oncogenic signaling in multiple cancers. 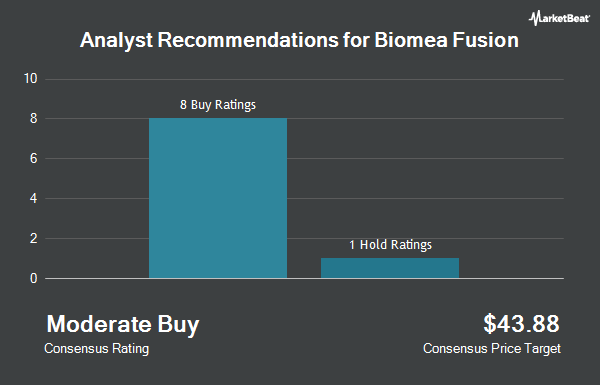 VersaBank Short Interest Down 78.2% in May

Horizonte Minerals Plc Short Interest Up 7,300.0% in May

Green Globe International, Inc. Short Interest Up 7,600.0% in May

Complete the form below to receive the latest headlines and analysts' recommendations for Biomea Fusion with our free daily email newsletter: