The Mosaic Company (NYSE:MOS – Get Rating) Director Gregory L. Ebel acquired 15,600 shares of the company’s stock in a transaction that occurred on Friday, May 6th. The shares were acquired at an average cost of $63.49 per share, for a total transaction of $990,444.00. Following the completion of the transaction, the director now directly owns 80,068 shares of the company’s stock, valued at $5,083,517.32. The purchase was disclosed in a filing with the SEC, which is available at the SEC website.

Mosaic (NYSE:MOS – Get Rating) last released its quarterly earnings results on Monday, May 2nd. The basic materials company reported $2.41 earnings per share for the quarter, beating the consensus estimate of $2.40 by $0.01. Mosaic had a return on equity of 23.80% and a net margin of 18.99%. During the same quarter in the previous year, the firm posted $0.57 earnings per share. As a group, research analysts predict that The Mosaic Company will post 12.69 EPS for the current fiscal year.

Mosaic declared that its Board of Directors has approved a share buyback program on Tuesday, February 22nd that authorizes the company to repurchase $1.00 billion in shares. This repurchase authorization authorizes the basic materials company to reacquire up to 6% of its stock through open market purchases. Stock repurchase programs are generally an indication that the company’s board believes its shares are undervalued. 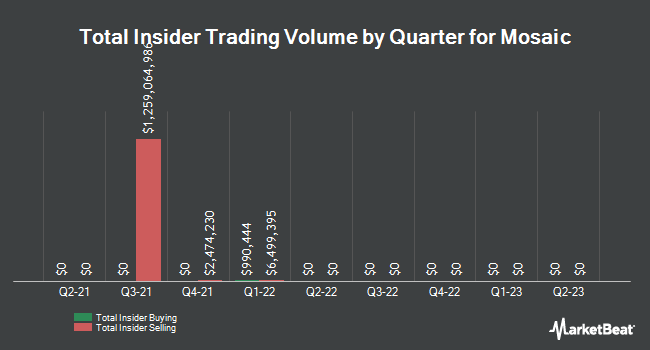