On average, analysts expect that Karuna Therapeutics will report full-year earnings of ($7.78) per share for the current financial year, with EPS estimates ranging from ($8.57) to ($6.36). For the next financial year, analysts forecast that the company will post earnings of ($7.74) per share, with EPS estimates ranging from ($9.16) to ($6.16). Zacks Investment Research’s EPS calculations are a mean average based on a survey of research analysts that that provide coverage for Karuna Therapeutics.

Karuna Therapeutics (NASDAQ:KRTX – Get Rating) last released its quarterly earnings results on Thursday, May 5th. The company reported ($1.95) earnings per share for the quarter, topping analysts’ consensus estimates of ($2.10) by $0.15. During the same period last year, the firm earned ($1.10) earnings per share.

About Karuna Therapeutics (Get Rating)

Karuna Therapeutics, Inc, a clinical-stage biopharmaceutical company, creates and delivers transformative medicines for people living with psychiatric and neurological conditions. Its lead product candidate is KarXT, an oral modulator of muscarinic receptors that is in Phase III clinical trial for the treatment of acute psychosis in patients with schizophrenia; and for the treatment of central nervous system disorders, such as negative and cognitive symptoms of schizophrenia and psychosis, as well as for the treatment of dementia-related psychosis. 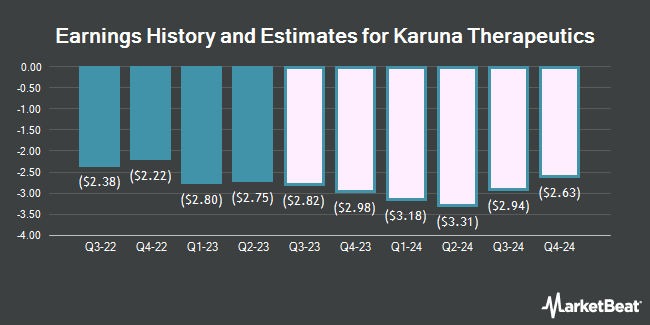 Complete the form below to receive the latest headlines and analysts' recommendations for Karuna Therapeutics with our free daily email newsletter: