Zacks Investment Research downgraded shares of Fastly (NYSE:FSLY – Get Rating) from a buy rating to a hold rating in a research note published on Monday, Zacks.com reports.

Fastly (NYSE:FSLY – Get Rating) last released its quarterly earnings data on Wednesday, May 4th. The company reported ($0.15) EPS for the quarter, missing analysts’ consensus estimates of ($0.14) by ($0.01). The company had revenue of $102.40 million for the quarter, compared to analysts’ expectations of $98.94 million. Fastly had a negative return on equity of 20.60% and a negative net margin of 63.54%. The firm’s quarterly revenue was up 20.7% on a year-over-year basis. During the same period in the prior year, the firm posted ($0.39) EPS. On average, equities research analysts expect that Fastly will post -1.77 earnings per share for the current year.

Fastly, Inc operates an edge cloud platform for processing, serving, and securing its customer's applications in the United States, the Asia Pacific, Europe, and internationally. The edge cloud is a category of Infrastructure as a Service that enables developers to build, secure, and deliver digital experiences at the edge of the internet. 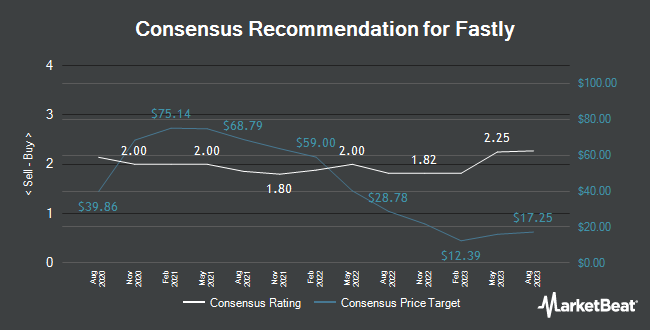 Receive News & Ratings for Fastly Daily - Enter your email address below to receive a concise daily summary of the latest news and analysts' ratings for Fastly and related companies with MarketBeat.com's FREE daily email newsletter.

Complete the form below to receive the latest headlines and analysts' recommendations for Fastly with our free daily email newsletter: