Shares of Theravance Biopharma, Inc. (NASDAQ:TBPH – Get Rating) have been assigned a consensus rating of “Hold” from the ten brokerages that are covering the company, MarketBeat Ratings reports. Two equities research analysts have rated the stock with a sell rating, six have issued a hold rating and two have given a buy rating to the company. The average 1 year price objective among brokers that have issued a report on the stock in the last year is $10.19.

Theravance Biopharma (NASDAQ:TBPH – Get Rating) last posted its quarterly earnings data on Wednesday, February 23rd. The biopharmaceutical company reported ($0.43) earnings per share (EPS) for the quarter, missing analysts’ consensus estimates of ($0.30) by ($0.13). The company had revenue of $14.95 million for the quarter, compared to the consensus estimate of $15.59 million. During the same quarter last year, the firm posted ($0.92) earnings per share. As a group, equities analysts predict that Theravance Biopharma will post 0.54 earnings per share for the current fiscal year.

Theravance Biopharma, Inc is a diversified biopharmaceutical company primarily focused on the discovery, development and commercialization of organ-selective medicines. Its purpose is to pioneer a new generation of small molecule drugs designed to better meet patient needs. Its research is focused in the areas of inflammation and immunology.
In pursuit of its purpose, Theravance Biopharma applies insights and innovation at each stage of its business and utilizes its internal capabilities and those of partners around the world. 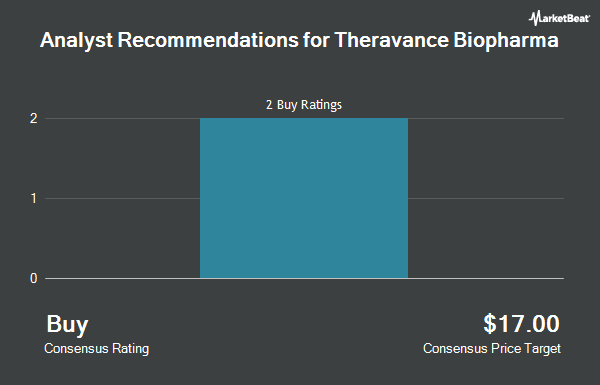 RH Given Average Rating of “Buy” by Brokerages

NVIDIA Co. Given Consensus Recommendation of “Buy” by Brokerages

Tripadvisor, Inc. Given Consensus Rating of “Hold” by Analysts

Complete the form below to receive the latest headlines and analysts' recommendations for Theravance Biopharma with our free daily email newsletter: