Agenus (NASDAQ:AGEN – Get Rating) released its quarterly earnings data on Tuesday. The biotechnology company reported ($0.19) EPS for the quarter, beating analysts’ consensus estimates of ($0.30) by $0.11, MarketWatch Earnings reports. During the same period in the previous year, the company posted ($0.27) earnings per share.

AGEN has been the topic of several research reports. B. Riley dropped their price objective on Agenus from $11.00 to $8.00 in a report on Thursday, March 3rd. Zacks Investment Research lowered Agenus from a “hold” rating to a “sell” rating in a research report on Friday, March 4th. HC Wainwright boosted their price objective on Agenus from $12.00 to $14.00 and gave the company a “buy” rating in a research note on Wednesday, March 2nd. Finally, StockNews.com initiated coverage on shares of Agenus in a research report on Thursday, March 31st. They set a “hold” rating on the stock. One investment analyst has rated the stock with a sell rating, one has assigned a hold rating and two have issued a buy rating to the company’s stock. According to data from MarketBeat, Agenus currently has a consensus rating of “Hold” and a consensus price target of $8.75.

Agenus Inc, a clinical-stage immuno-oncology company, discovers and develops immuno-oncology products in the United States and internationally. The company offers Retrocyte Display, an antibody expression platform for the identification of fully human and humanized monoclonal antibodies; and display technologies. 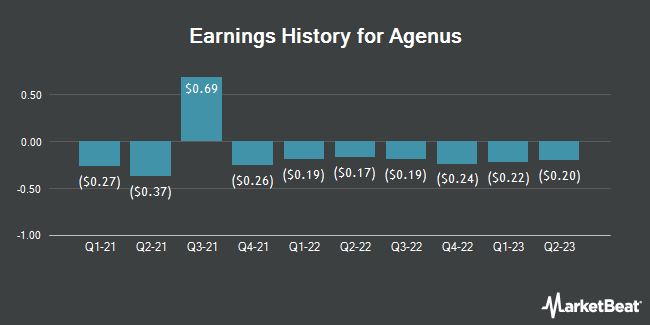 Receive News & Ratings for Agenus Daily - Enter your email address below to receive a concise daily summary of the latest news and analysts' ratings for Agenus and related companies with MarketBeat.com's FREE daily email newsletter.

Complete the form below to receive the latest headlines and analysts' recommendations for Agenus with our free daily email newsletter: