Boot Barn (NYSE:BOOT – Get Rating) issued its quarterly earnings results on Tuesday. The company reported $1.47 EPS for the quarter, topping analysts’ consensus estimates of $1.32 by $0.15, MarketWatch Earnings reports. The firm had revenue of $383.31 million for the quarter, compared to analysts’ expectations of $354.02 million. Boot Barn had a return on equity of 36.19% and a net margin of 12.93%. The business’s revenue for the quarter was up 48.1% compared to the same quarter last year. During the same period in the previous year, the firm posted $0.75 EPS.

In other news, insider John Hazen sold 11,254 shares of the company’s stock in a transaction that occurred on Monday, March 21st. The shares were sold at an average price of $100.44, for a total value of $1,130,351.76. The sale was disclosed in a document filed with the SEC, which is available through this link. Also, CFO James M. Watkins acquired 2,500 shares of the firm’s stock in a transaction dated Thursday, February 24th. The stock was bought at an average price of $77.00 per share, for a total transaction of $192,500.00. The disclosure for this purchase can be found here. Insiders own 0.86% of the company’s stock. 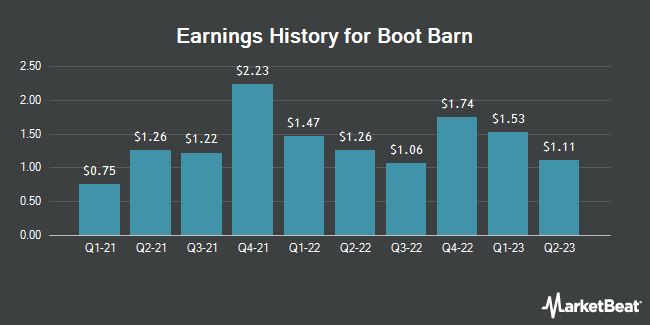