Kingfisher (LON:KGF – Get Rating)‘s stock had its “equal weight” rating reiterated by equities researchers at Morgan Stanley in a report issued on Wednesday, Digital Look reports.

A number of other research analysts have also issued reports on KGF. JPMorgan Chase & Co. reissued an “underweight” rating and issued a GBX 313 ($3.86) target price on shares of Kingfisher in a report on Monday, January 31st. Berenberg Bank dropped their price objective on Kingfisher from GBX 370 ($4.56) to GBX 295 ($3.64) and set a “hold” rating for the company in a research note on Thursday, March 24th. Deutsche Bank Aktiengesellschaft raised shares of Kingfisher to a “buy” rating and lowered their price objective for the company from GBX 355 ($4.38) to GBX 335 ($4.13) in a research note on Monday, April 4th. Finally, Royal Bank of Canada reiterated an “outperform” rating and issued a GBX 370 ($4.56) price target on shares of Kingfisher in a research report on Tuesday, May 3rd. One investment analyst has rated the stock with a sell rating, two have given a hold rating and three have issued a buy rating to the company. According to data from MarketBeat.com, the company currently has a consensus rating of “Hold” and a consensus price target of GBX 350.60 ($4.32).

Kingfisher plc, together with its subsidiaries, supplies home improvement products and services primarily in the United Kingdom, Ireland, France, and internationally. The company also offers property investment, finance, digital, sourcing and franchising, and IT services. It operates approximately 1,470 stores in eight countries across Europe under the B&Q, Castorama, Brico Dépôt, Screwfix, TradePoint, and Koctas brands. 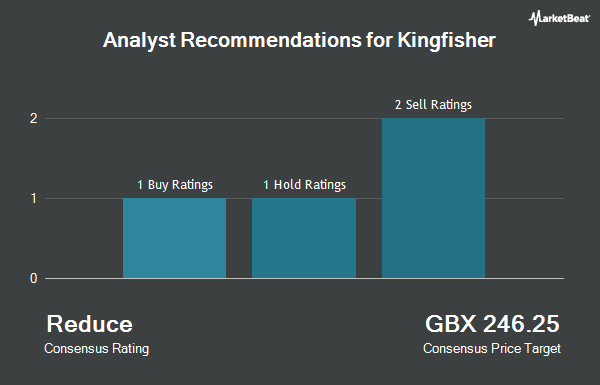 Complete the form below to receive the latest headlines and analysts' recommendations for Kingfisher with our free daily email newsletter: