Equities research analysts forecast that Las Vegas Sands Corp. (NYSE:LVS – Get Rating) will post $1.03 billion in sales for the current fiscal quarter, Zacks Investment Research reports. Five analysts have provided estimates for Las Vegas Sands’ earnings. The highest sales estimate is $1.22 billion and the lowest is $759.40 million. Las Vegas Sands posted sales of $1.17 billion in the same quarter last year, which would indicate a negative year-over-year growth rate of 12%. The company is scheduled to issue its next quarterly earnings results on Monday, January 1st.

On average, analysts expect that Las Vegas Sands will report full-year sales of $4.80 billion for the current year, with estimates ranging from $4.56 billion to $5.03 billion. For the next year, analysts expect that the company will post sales of $8.91 billion, with estimates ranging from $7.22 billion to $10.15 billion. Zacks Investment Research’s sales calculations are an average based on a survey of analysts that follow Las Vegas Sands.

Las Vegas Sands (NYSE:LVS – Get Rating) last released its quarterly earnings results on Wednesday, April 27th. The casino operator reported ($0.40) earnings per share (EPS) for the quarter, missing the consensus estimate of ($0.24) by ($0.16). The firm had revenue of $943.00 million during the quarter, compared to the consensus estimate of $1.13 billion. Las Vegas Sands had a net margin of 46.40% and a negative return on equity of 33.07%. The business’s revenue for the quarter was down 21.2% compared to the same quarter last year. During the same quarter last year, the firm earned ($0.25) earnings per share.

About Las Vegas Sands (Get Rating)

Las Vegas Sands Corp., together with its subsidiaries, develops, owns, and operates integrated resorts in Asia and the United States. It owns and operates The Venetian Macao Resort Hotel, the Londoner Macao, The Parisian Macao, The Plaza Macao and Four Seasons Hotel Macao, Cotai Strip, and the Sands Macao in Macao, the People's Republic of China; and Marina Bay Sands in Singapore. 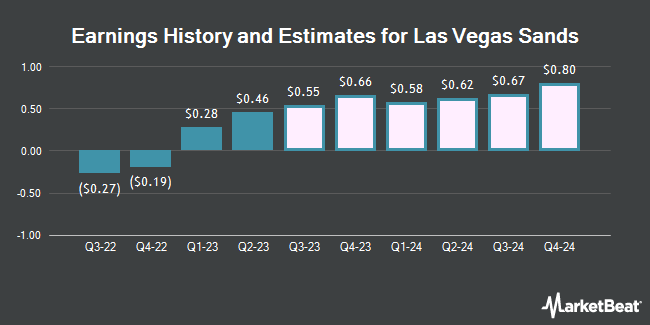 Complete the form below to receive the latest headlines and analysts' recommendations for Las Vegas Sands with our free daily email newsletter: