Velodyne Lidar, Inc. (NASDAQ:VLDR – Get Rating) Director Virginia Boulet acquired 40,000 shares of the business’s stock in a transaction that occurred on Tuesday, May 10th. The stock was purchased at an average cost of $1.63 per share, with a total value of $65,200.00. Following the acquisition, the director now directly owns 102,000 shares of the company’s stock, valued at $166,260. The purchase was disclosed in a legal filing with the SEC, which is available at this link.

Velodyne Lidar (NASDAQ:VLDR – Get Rating) last released its earnings results on Thursday, May 5th. The company reported ($0.22) earnings per share for the quarter, missing analysts’ consensus estimates of ($0.18) by ($0.04). Velodyne Lidar had a negative net margin of 440.65% and a negative return on equity of 69.35%. The firm had revenue of $6.20 million for the quarter, compared to analysts’ expectations of $10.10 million. During the same quarter last year, the firm posted ($0.20) EPS. The firm’s quarterly revenue was down 65.0% compared to the same quarter last year. Equities research analysts expect that Velodyne Lidar, Inc. will post -0.9 EPS for the current year. 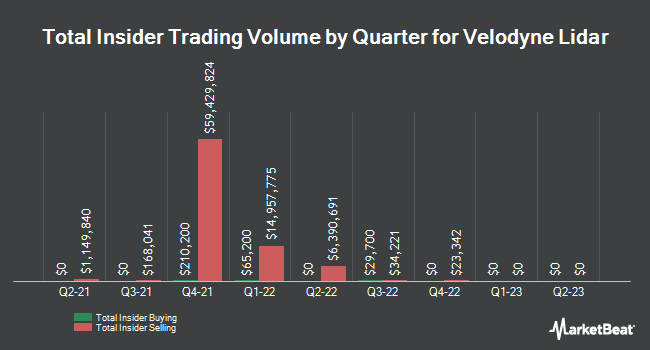