AVROBIO (NASDAQ:AVRO – Get Rating) had its price target cut by Wedbush from $14.00 to $4.00 in a report issued on Wednesday, The Fly reports. Wedbush’s price target would suggest a potential upside of 381.93% from the stock’s current price.

Several other analysts also recently issued reports on the stock. Zacks Investment Research raised shares of AVROBIO from a “hold” rating to a “buy” rating and set a $1.75 price target on the stock in a report on Monday, March 21st. Barclays reduced their price target on shares of AVROBIO from $6.00 to $4.00 in a report on Wednesday. Two investment analysts have rated the stock with a hold rating and five have issued a buy rating to the stock. According to data from MarketBeat, AVROBIO presently has an average rating of “Buy” and a consensus target price of $6.86.

AVROBIO (NASDAQ:AVRO – Get Rating) last issued its quarterly earnings results on Tuesday, May 10th. The company reported ($0.68) earnings per share (EPS) for the quarter, missing analysts’ consensus estimates of ($0.58) by ($0.10). Equities research analysts anticipate that AVROBIO will post -2.02 EPS for the current year.

AVROBIO, Inc, a clinical-stage gene therapy company, develops ex vivo lentiviral-based gene therapies to treat rare diseases following a single dose worldwide. Its gene therapies employ hematopoietic stem cells that are collected from patients and modified with a lentiviral vector to insert functional copies of the gene that is defective in the target disease. 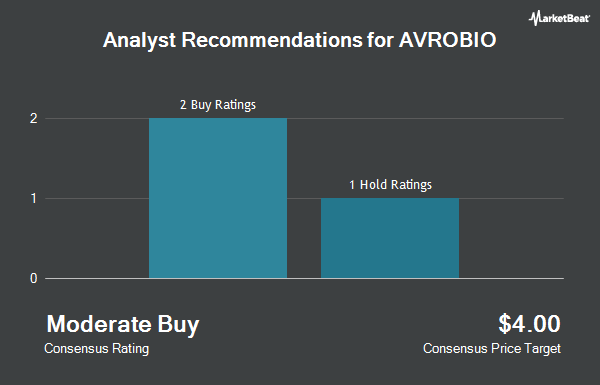 Receive News & Ratings for AVROBIO Daily - Enter your email address below to receive a concise daily summary of the latest news and analysts' ratings for AVROBIO and related companies with MarketBeat.com's FREE daily email newsletter.

$10.09 Million in Sales Expected for Nurix Therapeutics, Inc. This Quarter

$3.01 Billion in Sales Expected for Unum Group This Quarter

$17.91 Billion in Sales Expected for Citigroup Inc. This Quarter

Complete the form below to receive the latest headlines and analysts' recommendations for AVROBIO with our free daily email newsletter: