On average, analysts expect that Computer Programs and Systems will report full year sales of $315.31 million for the current financial year, with estimates ranging from $293.12 million to $326.80 million. For the next fiscal year, analysts anticipate that the business will report sales of $332.97 million, with estimates ranging from $307.80 million to $351.30 million. Zacks Investment Research’s sales calculations are an average based on a survey of sell-side research firms that cover Computer Programs and Systems.

Computer Programs and Systems (NASDAQ:CPSI – Get Rating) last released its quarterly earnings data on Tuesday, May 3rd. The company reported $0.81 EPS for the quarter, topping analysts’ consensus estimates of $0.66 by $0.15. Computer Programs and Systems had a net margin of 7.71% and a return on equity of 16.43%. During the same quarter in the prior year, the company earned $0.28 EPS.

Computer Programs and Systems, Inc provides healthcare information technology solutions and services in the United States and the Caribbean nation of St. Maarten. Its software systems include patient management software that enables a hospital to identify a patient at various points in the healthcare delivery system, as well as to collect and maintain patient information throughout the process of patient care; and financial accounting software, which offers business office applications to track and coordinate information needed for managerial decision-making. 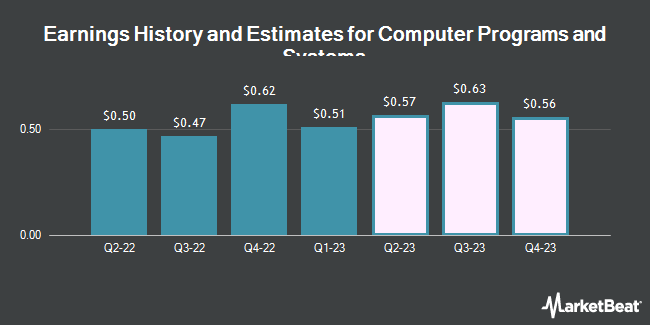 Complete the form below to receive the latest headlines and analysts' recommendations for Computer Programs and Systems with our free daily email newsletter: