On average, analysts expect that First Guaranty Bancshares will report full year sales of $122.31 million for the current financial year, with estimates ranging from $113.32 million to $131.30 million. For the next fiscal year, analysts anticipate that the firm will post sales of $138.41 million, with estimates ranging from $121.71 million to $155.10 million. Zacks Investment Research’s sales averages are an average based on a survey of research analysts that follow First Guaranty Bancshares.

The business also recently announced a quarterly dividend, which was paid on Thursday, March 31st. Shareholders of record on Monday, March 21st were paid a $0.16 dividend. This represents a $0.64 annualized dividend and a yield of 2.25%. The ex-dividend date of this dividend was Friday, March 18th. First Guaranty Bancshares’s payout ratio is 24.57%.

In other First Guaranty Bancshares news, Chairman Marshall T. Reynolds sold 1,390 shares of the stock in a transaction dated Thursday, March 17th. The stock was sold at an average price of $22.16, for a total value of $30,802.40. The transaction was disclosed in a document filed with the SEC, which is available at this hyperlink. Corporate insiders own 42.70% of the company’s stock.

About First Guaranty Bancshares (Get Rating) 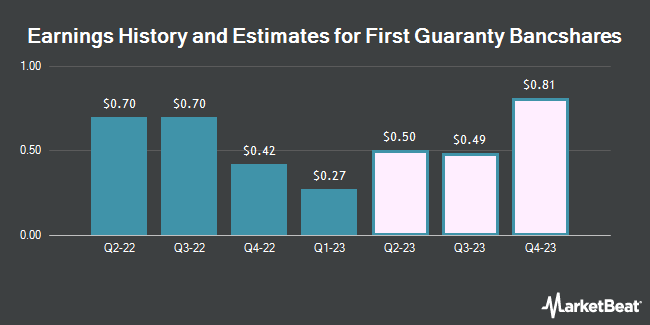 $62.66 Million in Sales Expected for Eventbrite, Inc. This Quarter

Autodesk Price Target Lowered to $255.00 at Royal Bank of Canada

Complete the form below to receive the latest headlines and analysts' recommendations for First Guaranty Bancshares with our free daily email newsletter: