OSI Systems, Inc. (NASDAQ:OSIS – Get Rating) General Counsel Victor S. Sze sold 4,786 shares of the stock in a transaction that occurred on Monday, May 9th. The stock was sold at an average price of $80.17, for a total value of $383,693.62. Following the transaction, the general counsel now owns 84,812 shares in the company, valued at approximately $6,799,378.04. The sale was disclosed in a filing with the Securities & Exchange Commission, which is available at this link.

OSI Systems (NASDAQ:OSIS – Get Rating) last posted its quarterly earnings results on Thursday, April 28th. The technology company reported $1.43 EPS for the quarter, beating the consensus estimate of $1.39 by $0.04. OSI Systems had a return on equity of 15.74% and a net margin of 9.12%. The firm had revenue of $290.48 million during the quarter, compared to analysts’ expectations of $287.76 million. During the same quarter last year, the firm earned $1.38 earnings per share. The business’s revenue for the quarter was up 2.4% on a year-over-year basis. As a group, research analysts anticipate that OSI Systems, Inc. will post 5.81 EPS for the current fiscal year. 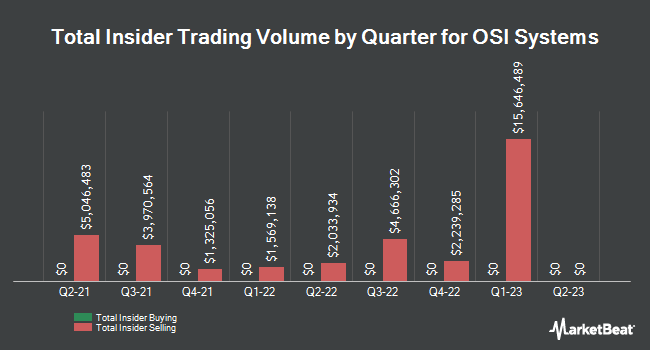