OPKO Health, Inc. (NASDAQ:OPK – Get Rating) Vice Chairman Elias A. Zerhouni purchased 89,600 shares of OPKO Health stock in a transaction dated Tuesday, May 10th. The stock was bought at an average price of $2.79 per share, for a total transaction of $249,984.00. Following the completion of the transaction, the insider now directly owns 89,600 shares in the company, valued at $249,984. The transaction was disclosed in a document filed with the Securities & Exchange Commission, which is available at this link.

OPKO Health (NASDAQ:OPK – Get Rating) last issued its quarterly earnings data on Monday, May 9th. The biotechnology company reported ($0.08) earnings per share (EPS) for the quarter, missing analysts’ consensus estimates of ($0.06) by ($0.02). OPKO Health had a negative return on equity of 1.75% and a negative net margin of 1.70%. The firm had revenue of $329.20 million for the quarter, compared to the consensus estimate of $331.45 million. During the same quarter in the prior year, the firm earned $0.05 EPS. The company’s revenue was down 39.6% on a year-over-year basis. As a group, research analysts anticipate that OPKO Health, Inc. will post -0.09 EPS for the current fiscal year.

About OPKO Health (Get Rating) 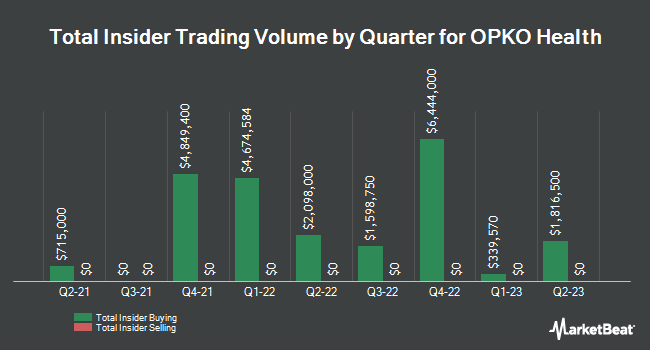