adidas (OTCMKTS:ADDYY – Get Rating) last posted its quarterly earnings data on Wednesday, March 9th. The company reported $0.34 earnings per share for the quarter, topping the consensus estimate of $0.15 by $0.19. The company had revenue of $5.88 billion during the quarter, compared to analyst estimates of $5.83 billion. adidas had a net margin of 10.01% and a return on equity of 18.90%.

About adidas (Get Rating)

adidas AG, together with its subsidiaries, designs, develops, distributes, and markets athletic and sports lifestyle products worldwide. It offers footwear; apparel; and accessories and gear, such as bags and balls under the adidas brand. It sells its products through approximately 2,200 own-retail stores; mono-branded franchise stores and shop-in-shops; and wholesale and its e-commerce channels. 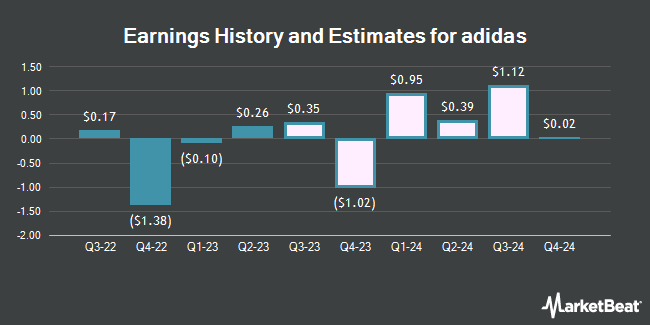 Receive News & Ratings for adidas Daily - Enter your email address below to receive a concise daily summary of the latest news and analysts' ratings for adidas and related companies with MarketBeat.com's FREE daily email newsletter.

Oppenheimer Trims Jack in the Box Target Price to $107.00

Complete the form below to receive the latest headlines and analysts' recommendations for adidas with our free daily email newsletter: