Rand Capital Co. (NASDAQ:RAND – Get Rating) Director Adam Samuel Gusky bought 7,544 shares of the firm’s stock in a transaction that occurred on Tuesday, May 10th. The stock was bought at an average price of $14.88 per share, with a total value of $112,254.72. Following the completion of the acquisition, the director now owns 16,625 shares of the company’s stock, valued at approximately $247,380. The transaction was disclosed in a document filed with the SEC, which is accessible through this hyperlink.

Rand Capital (NASDAQ:RAND – Get Rating) last announced its quarterly earnings results on Tuesday, March 8th. The asset manager reported $0.16 earnings per share (EPS) for the quarter. The company had revenue of $1.24 million during the quarter. Rand Capital had a return on equity of 2.75% and a net margin of 387.59%.

The firm also recently declared a quarterly dividend, which will be paid on Wednesday, June 15th. Shareholders of record on Wednesday, June 1st will be issued a dividend of $0.15 per share. This represents a $0.60 dividend on an annualized basis and a yield of 4.00%. The ex-dividend date of this dividend is Tuesday, May 31st. Rand Capital’s dividend payout ratio (DPR) is 9.80%.

An institutional investor recently raised its position in Rand Capital stock. Shufro Rose & Co. LLC increased its position in Rand Capital Co. (NASDAQ:RAND – Get Rating) by 168.0% in the 1st quarter, according to its most recent filing with the SEC. The fund owned 41,394 shares of the asset manager’s stock after purchasing an additional 25,950 shares during the period. Shufro Rose & Co. LLC owned 1.60% of Rand Capital worth $627,000 at the end of the most recent quarter. 1.41% of the stock is currently owned by hedge funds and other institutional investors. 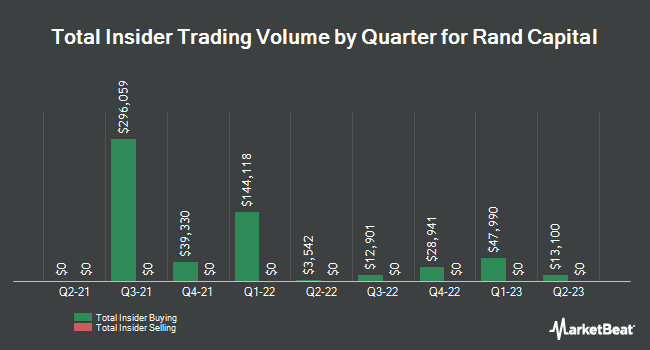 $49.10 Million in Sales Expected for Limoneira This Quarter

BMO Capital Markets Given Average Recommendation of “” by Brokerages

Complete the form below to receive the latest headlines and analysts' recommendations for Rand Capital with our free daily email newsletter: