Caesarstone (NASDAQ:CSTE – Get Rating) issued its quarterly earnings data on Wednesday. The construction company reported $0.14 earnings per share for the quarter, topping analysts’ consensus estimates of $0.09 by $0.05, MarketWatch Earnings reports. Caesarstone had a net margin of 2.95% and a return on equity of 5.47%. During the same period in the prior year, the company earned $0.41 earnings per share. Caesarstone updated its FY 2022 guidance to EPS.

Caesarstone Ltd., together with its subsidiaries, develops, manufactures, and markets engineered quartz and other surfaces under the Caesarstone brand in the United States, Australia, Canada, Latin America, Asia, Israel, Europe, the Middle East, and Africa. The company's engineered quartz slabs are primarily used as indoor and outdoor kitchen countertops in the renovation and remodeling construction end markets. 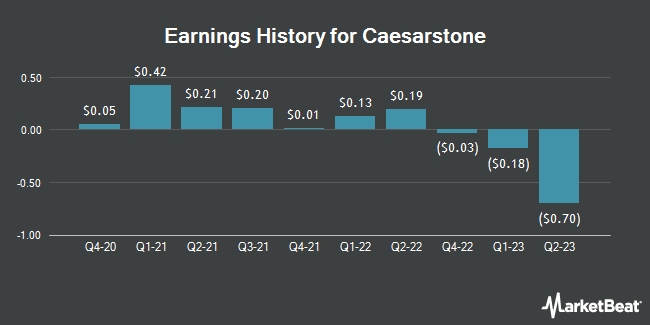 Complete the form below to receive the latest headlines and analysts' recommendations for Caesarstone with our free daily email newsletter: